I didn't know I would find the Whooping Cranes so quickly, and planned to spend an entire three-day weekend searching if necessary.  It wasn't, but since I was too tired to drive several hours back home, I drove 35 miles to Rockport and got a room at the Econolodge.  I was already there, so I might as well go back the next morning and see what else I could find.  I was in no rush because it was still 38 degrees outside, and I was tired of birdwatching in the cold.  I killed time eating a late breakfast and sorting through the previous day's photos until 11 am, when it had warmed to a balmy 50 degrees Fahrenheit.  I'm not sure if I would have gotten the second look at the cranes if I hadn't.  Who knows if they were in that roadside field earlier in the day?


I probably would have missed the armadillo, too.  Looks like the 9-banded to me.  I have reptile, insect, and bird books, but no mammalian field guides.  I should probably order one, because I've been seeing some interesting critters in addition to birds.  I would like to be able to positively identify them instead of guessing.

This cutie was hanging out beside the observation platform at Heron Flats.  He completely ignored us, busily foraging for ants. 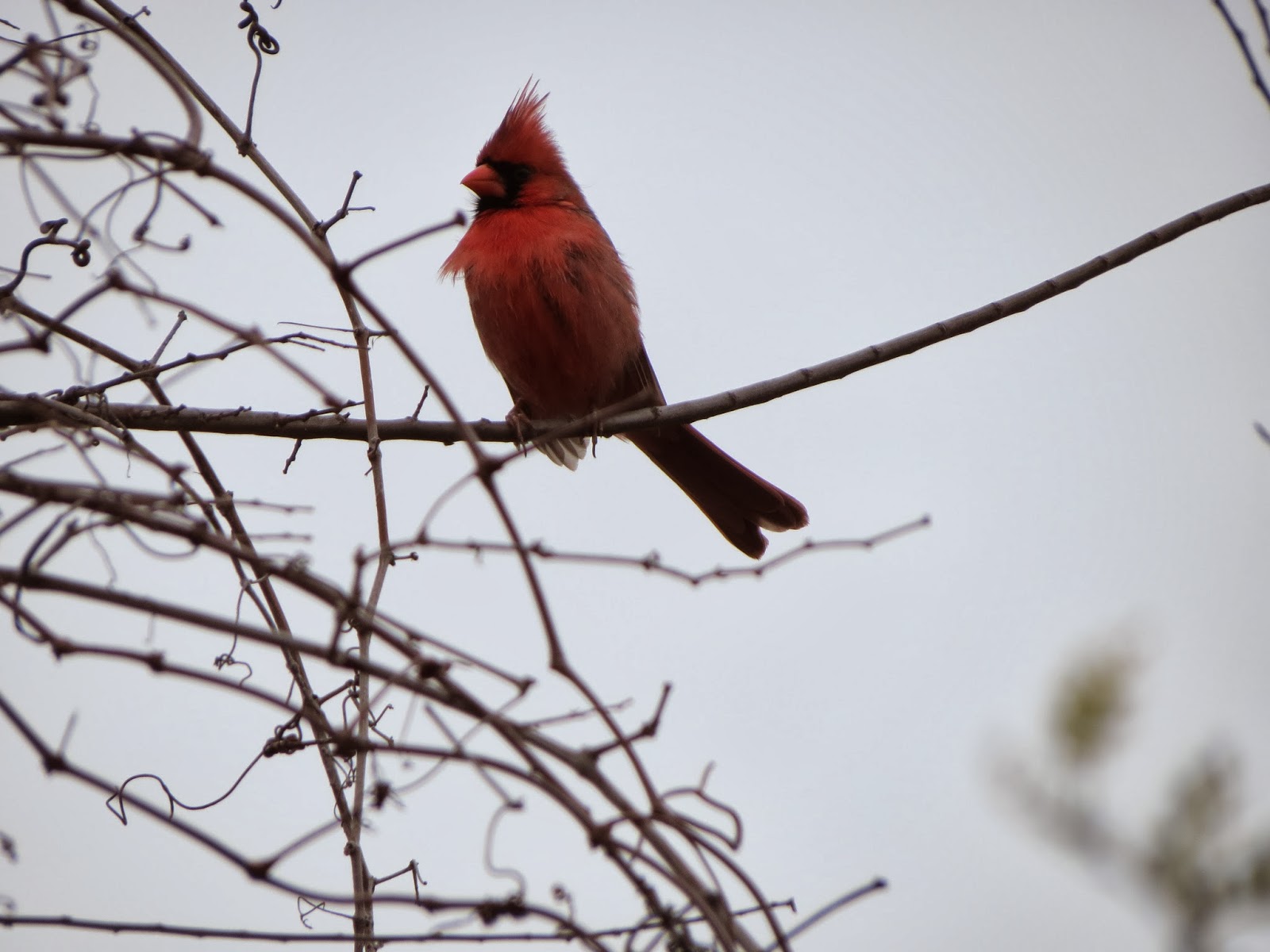 I wandered along the Rail Trail, which I hadn't visited the previous day.  I saw a pair of Northern Cardinals, a second armadillo, grebes, ibis, and other birds, but no rails. 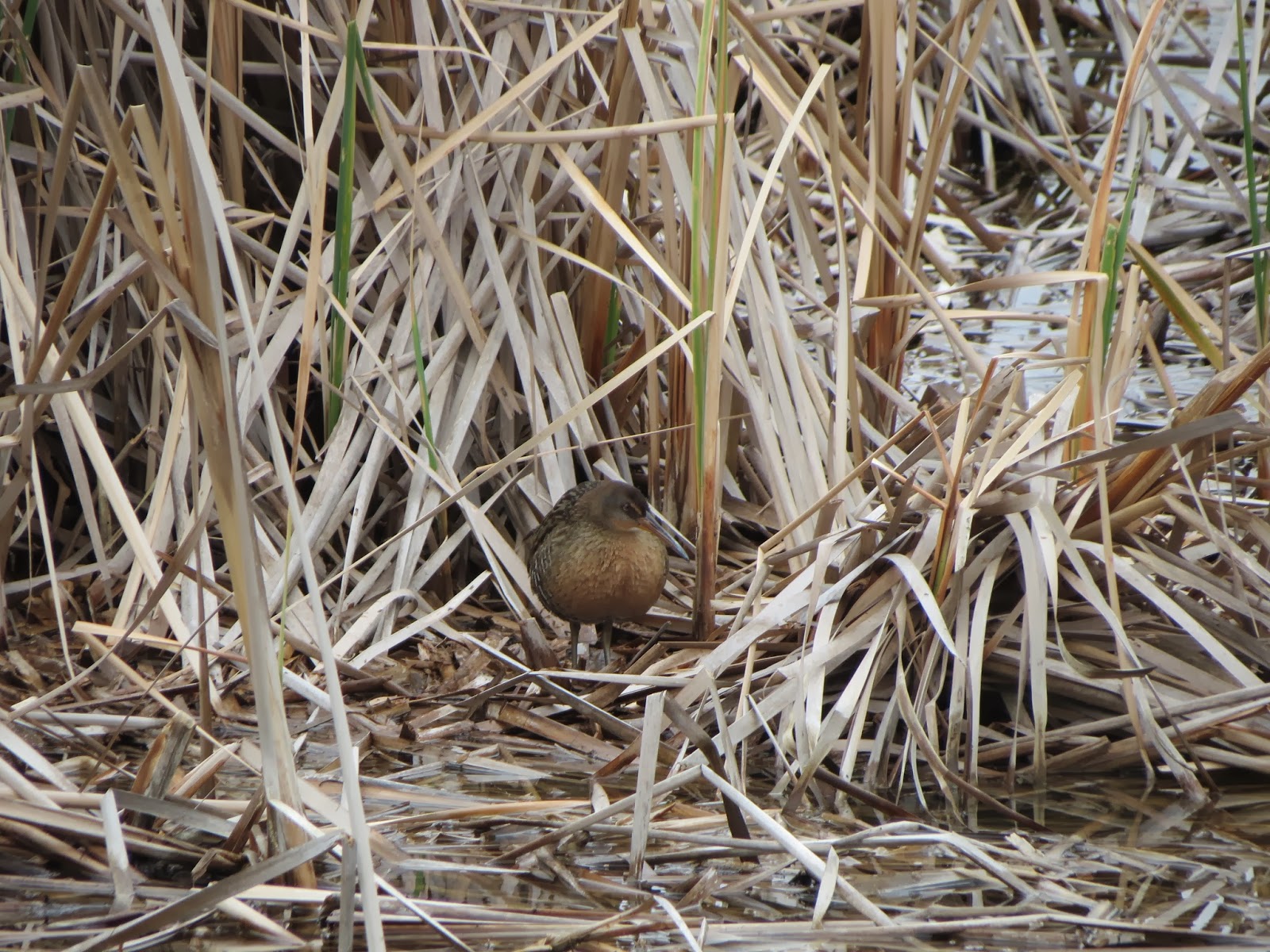 I did find a King Rail at the head of the Heron Flats Trail.  Actually, another birder pointed it out.  I stared in the direction she was pointing for five minutes and didn't see it.  She told me exactly where it was.  "Look at the clump of grass in the middle, all the way to the right..."

He blends in well with his environment and does not move, so I still couldn't see him until... 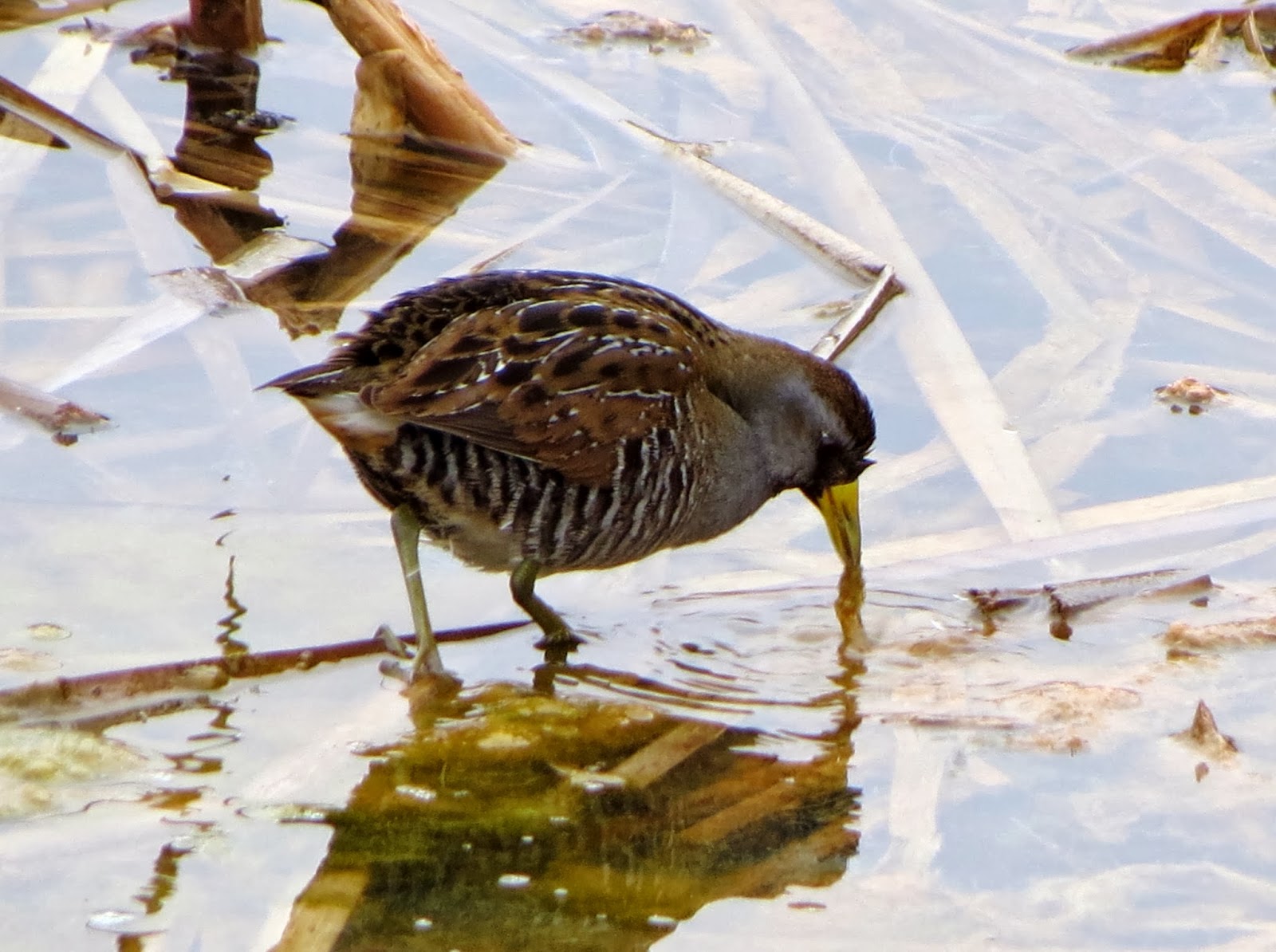 ...the Sora wandered directly in front of him.

I'm wondering if there were other rails along the Rail Trail and I just couldn't see them.  It's a pain bringing both binoculars and a camera, but I guess I need both so I can scan each and every clump of grass for hidden feathered creatures. 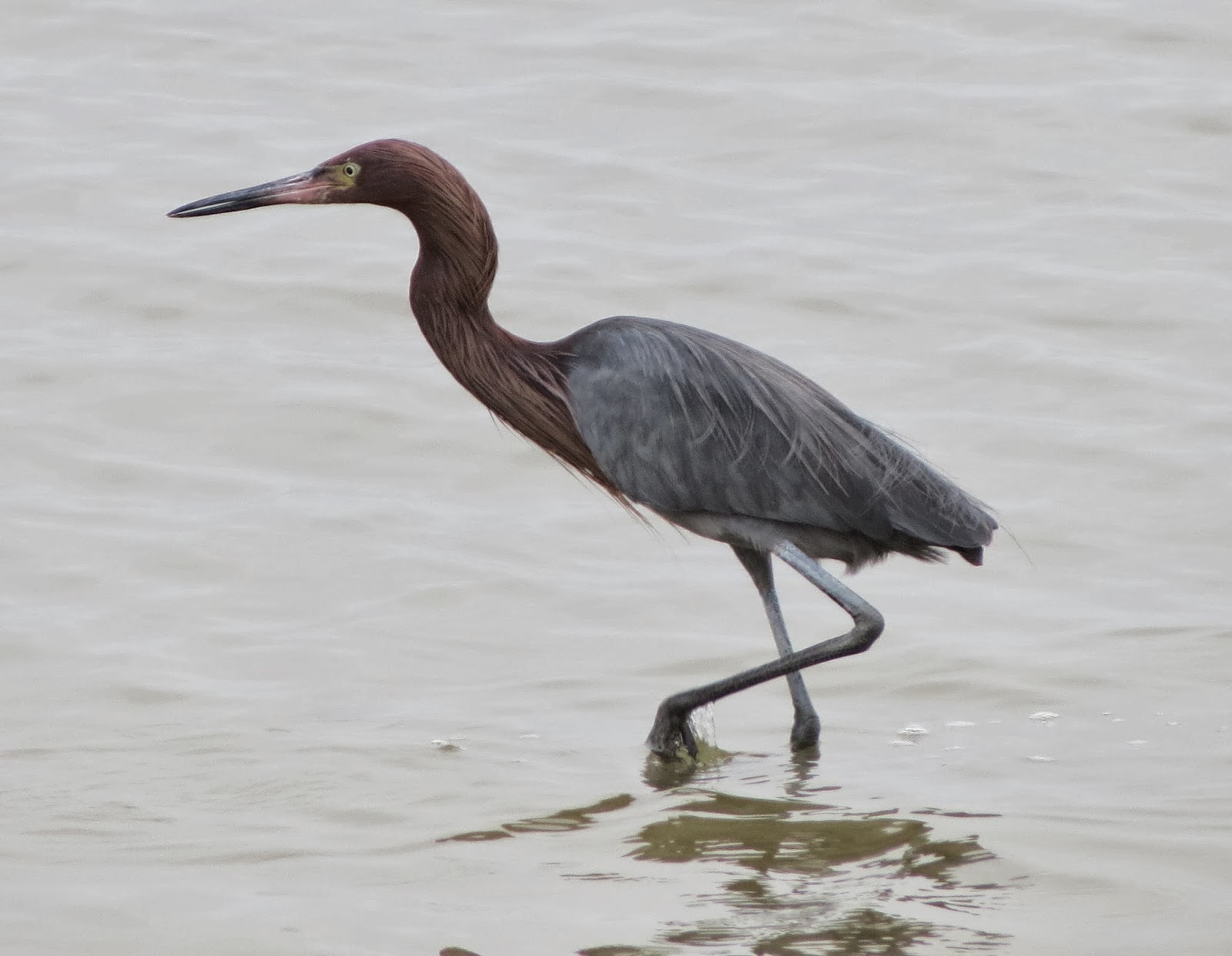 I found the Reddish Egret not far from the picnic area overlooking San Antonio Bay.  That pink base of his bill and larger size differentiates him from the Little Blue Heron.  He's also a much more active feeder, lurching and dashing about while the Little Blue is usually motionless.

I went to Aransas in search of Whooping Cranes, which I found at Heron Flats.  There is much more to see than the cranes, though.  The refuge is home to 400 different bird species, not to mention the other mammals and reptiles, including alligators.  Near dusk, I saw several deer and a family of feral hogs. 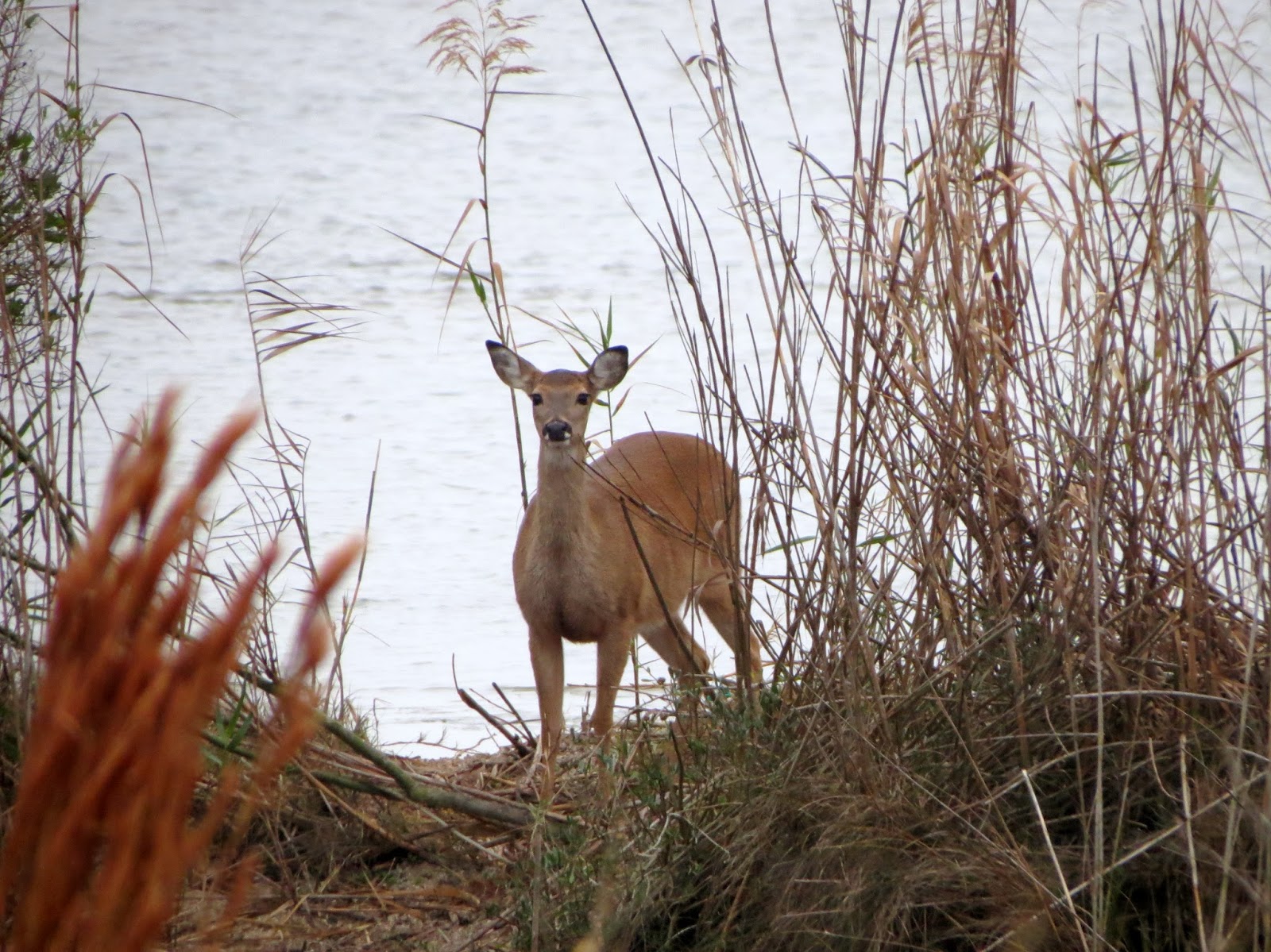 It was a cold weekday, the constant mist and wind making it feel even colder than the 38 deg C which was the high for the day.  The only other people on the Heron Flats Trail were a couple from Philadelphia, PA who had driven down in search of warm weather and birds.  Well, at least they found birds. 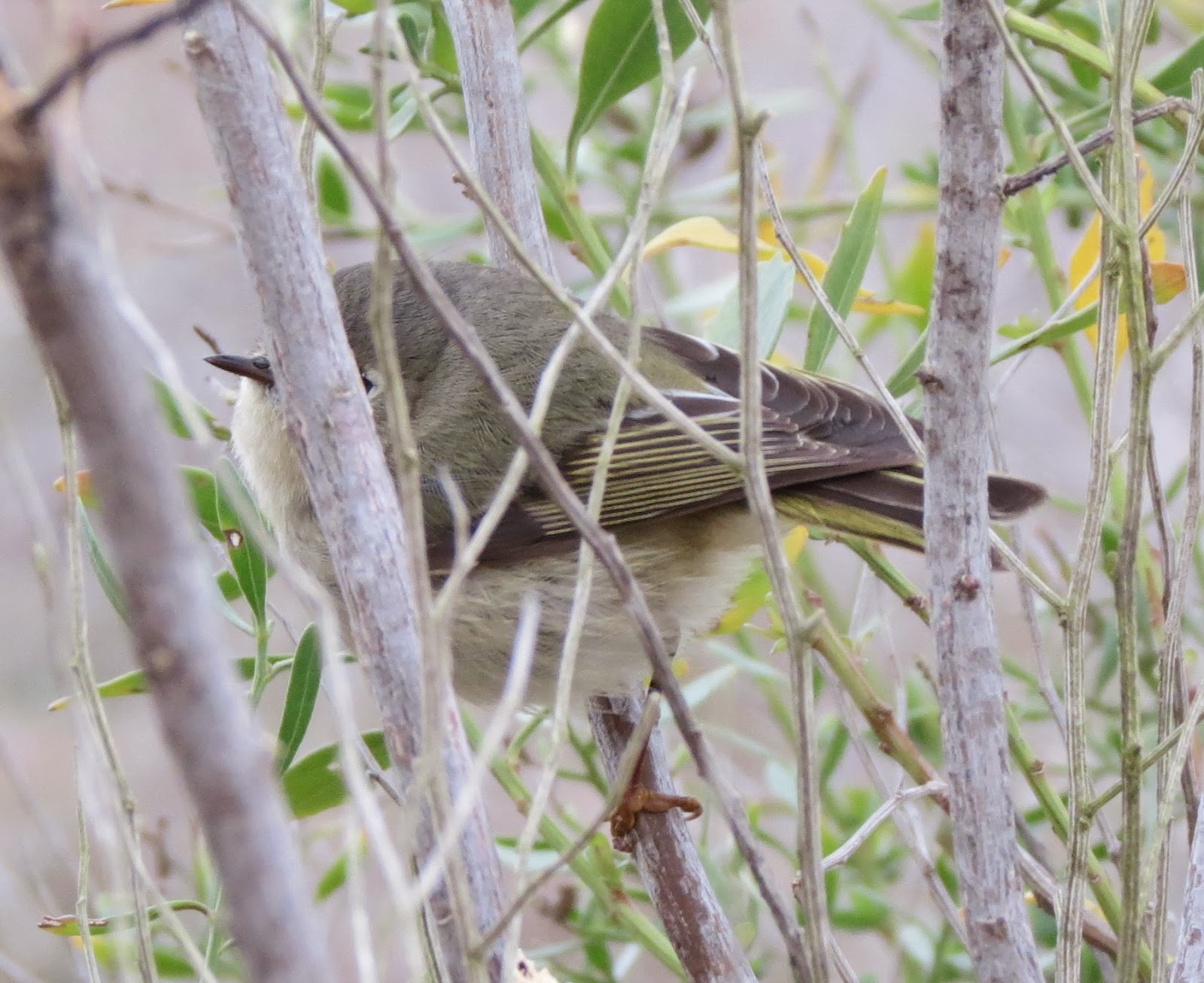 The Ruby-crowned Kinglet is an extremely active, tiny bird.  I only got one shot before it was gone.  I don't know if I'll ever get a better photograph because I've never seen one sit still for more than 3 seconds. 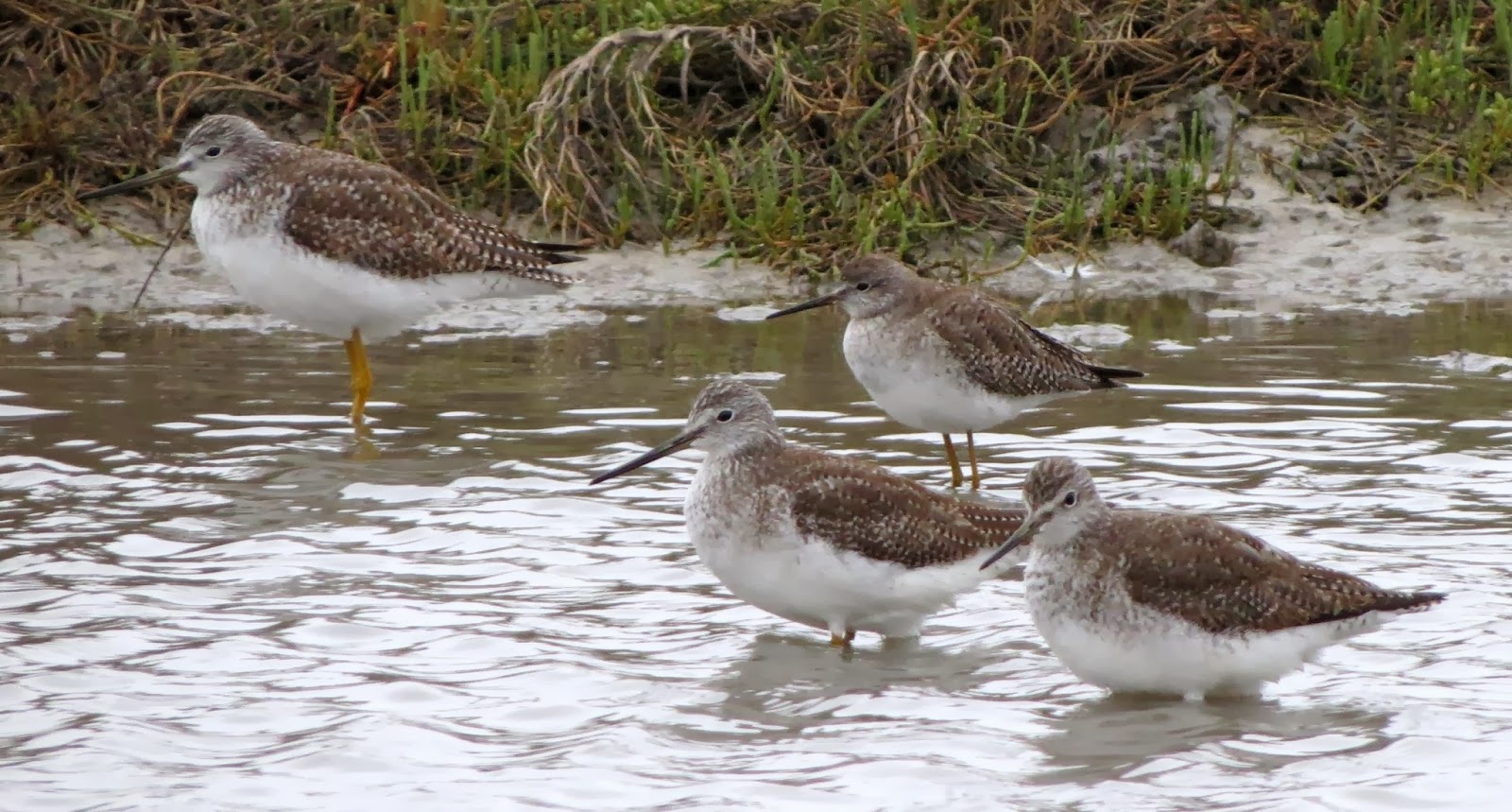 I spent a long time trying to determine whether I'd captured Greater or Lesser Yellowlegs.  I finally decided they are both here.  The one in the back on the right is smaller and has a shorter, straighter bill than the two birds on it's left, whose bills are longer and slightly upturned. 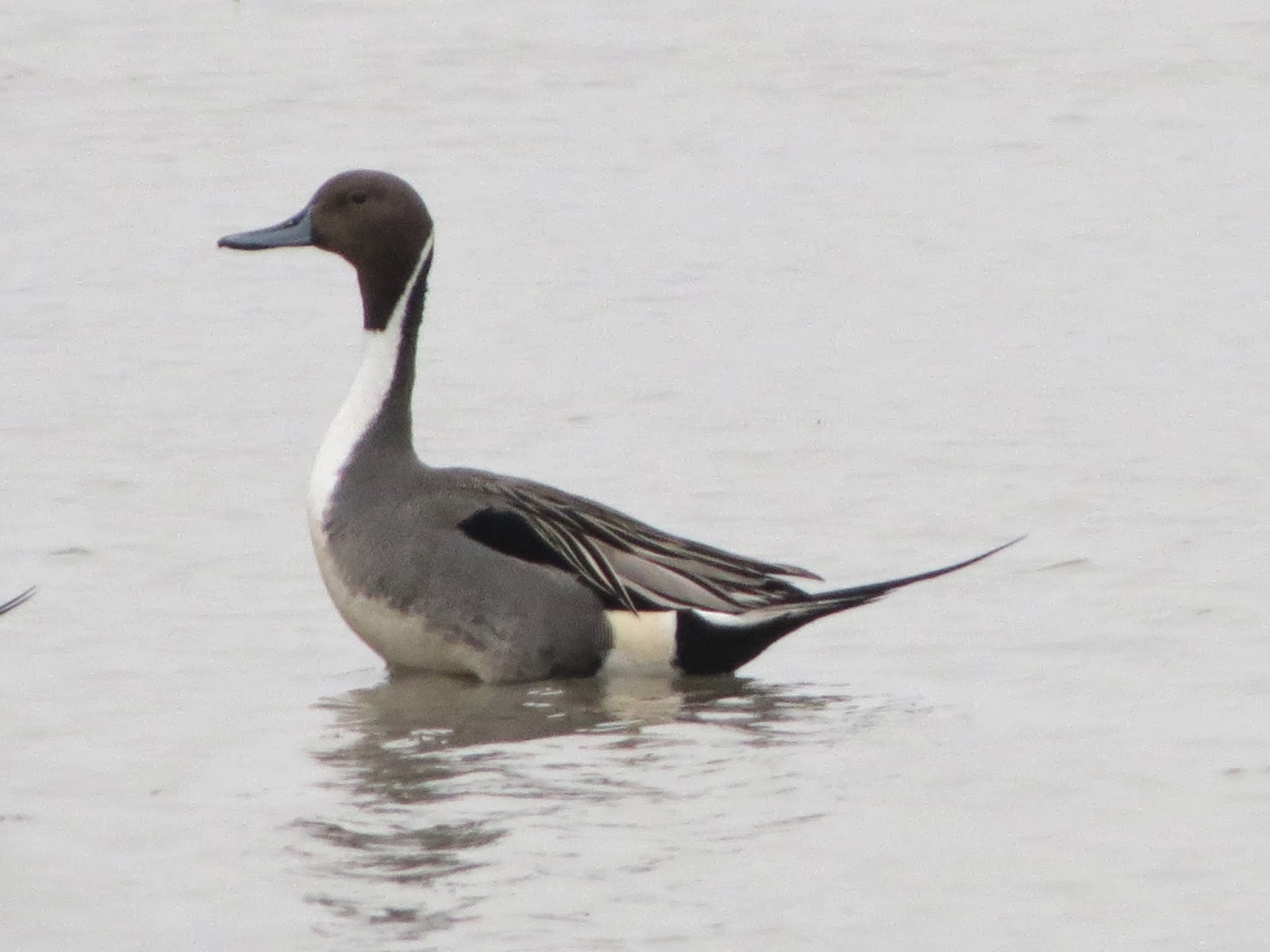 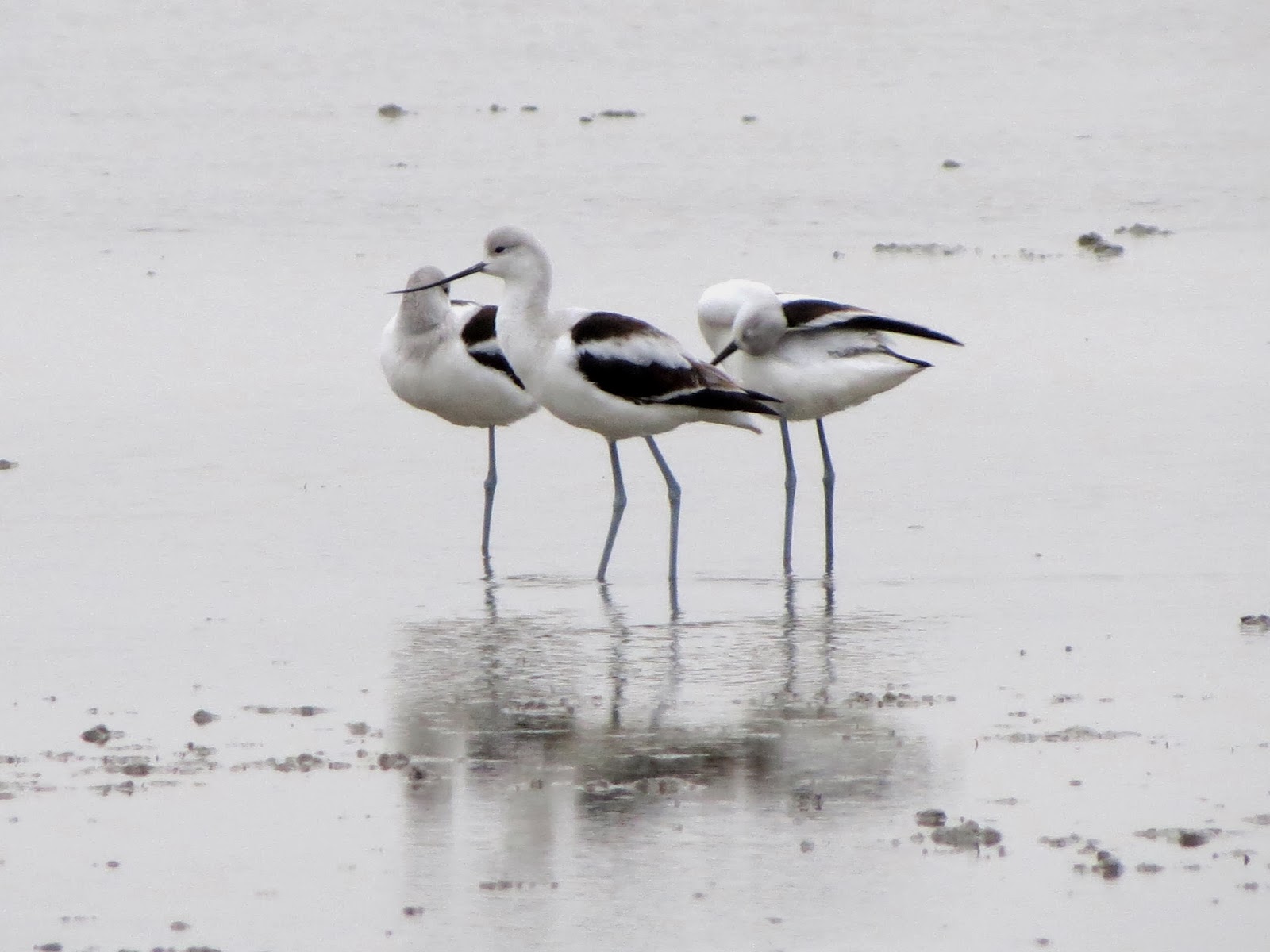 I think the American Avocet looks more elegant in it's black-and-white winter plumage than in the summer, when it has a cinnamon head and neck.

I'm linking up with Wild Bird Wednesday.  Visit to view amazing birds from around the world.
Posted by Jen at 1:12 PM 17 comments:

One of my Facebook friends posted photos of whooping cranes, making me jealous  inspiring me to travel south in search of them myself.

Success!  Once numbering only 15 in 1941, there are currently over 500 in North America.  They are still one of the most endangered birds in the world and they spend their winters here in Texas.  They can
also be found at their nesting grounds in Wood Buffalo National Park, Canada. 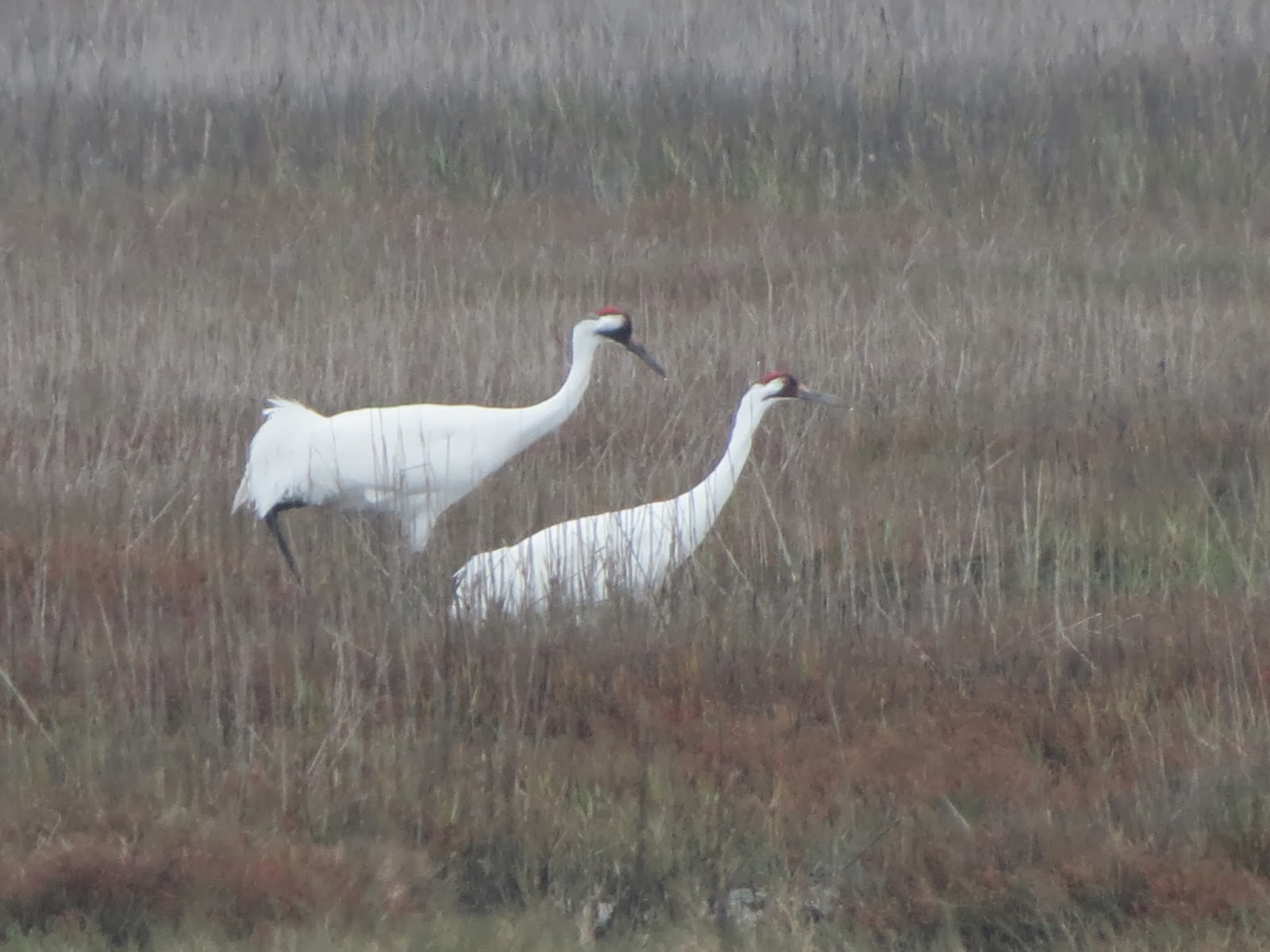 Upon my arrival at Aransas National Wildlife Refuge, I asked the volunteer rangers on duty at the headquarters where I would be most likely the see the whooping cranes.  I found a pair at Heron Flats, just as they said I might.  Each pair vigorously defends a territory of about 250 acres in size, so it's unlikely to find more than a small family in one spot.

The next morning I spotted a family on the side of the road.  Along Highway 35 between Rockport and Aransas NWR is where I took these photos. 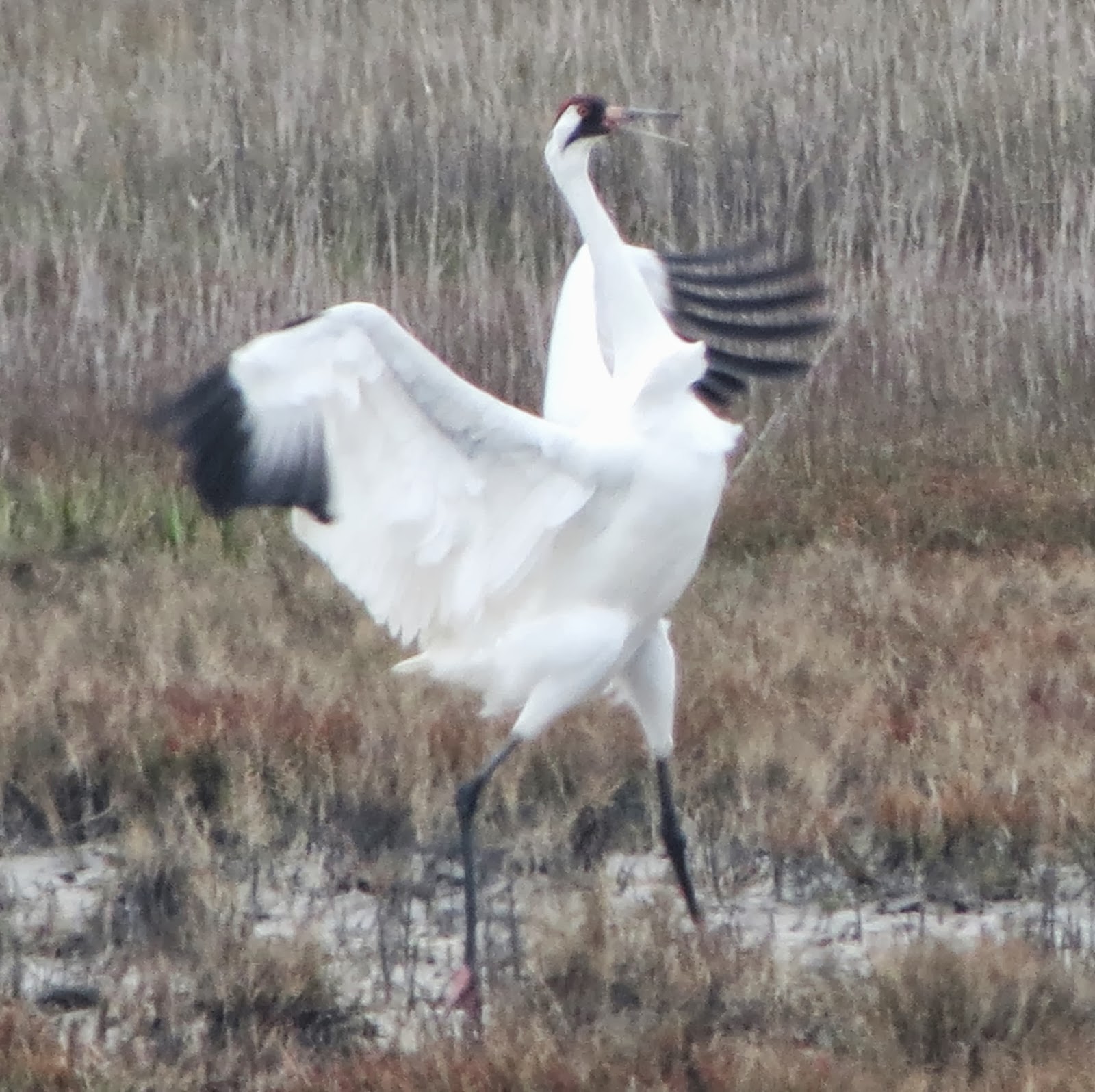 Standing five feet tall, these are the tallest birds in the United States.  If I was closer to him when he did this I would have been frightened and might have been tempted to run.  They keep their distance, though, and will likely be quite a distance away when spotted.  These certainly tested the limits of my zoom lens. 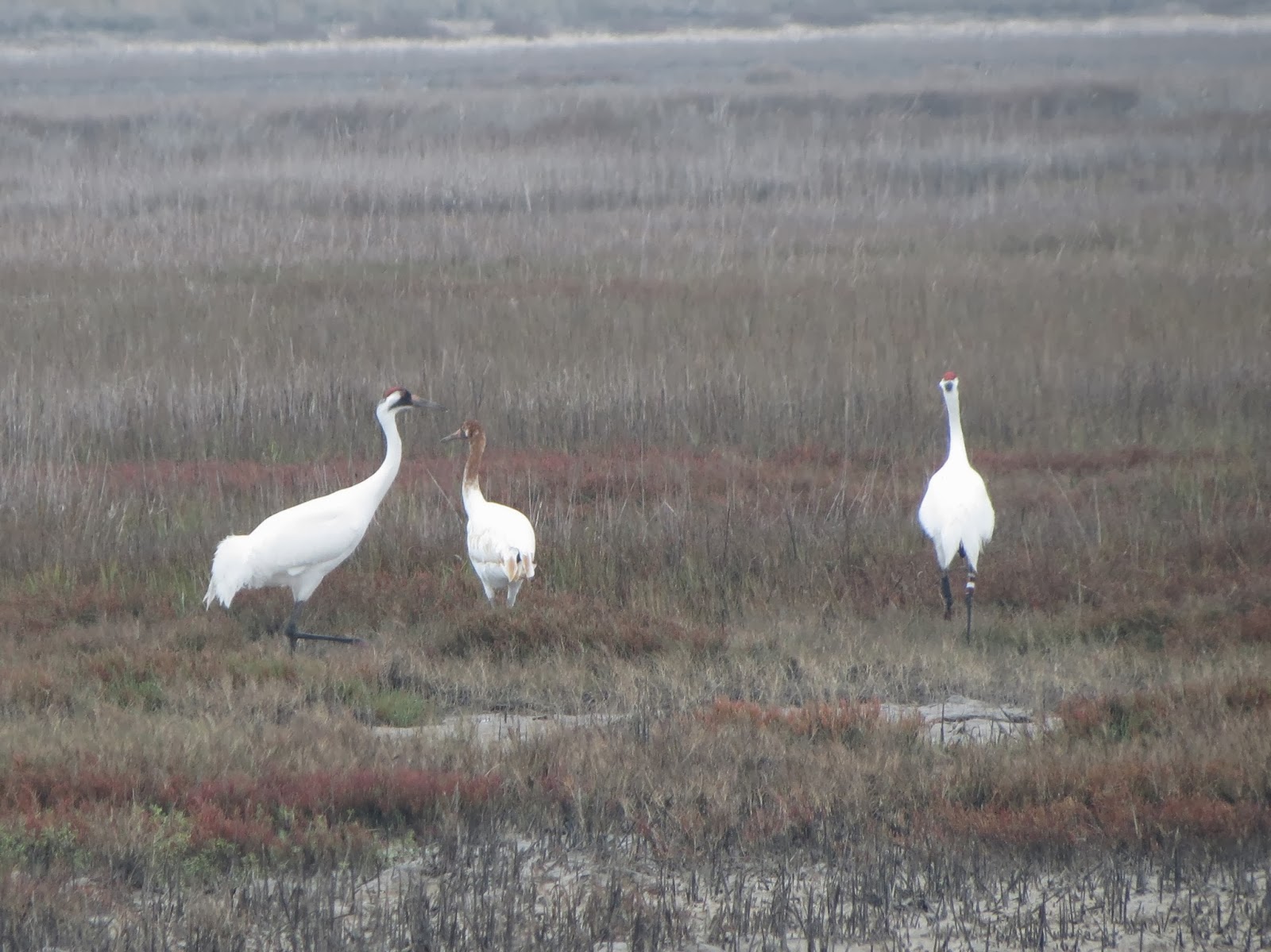 I'm linking up with Wild Bird Wednesday.  Visit to view birds from around the world or link up your own.


It was a wet, cold weekend - the perfect time to visit a site which didn't require me to leave the warm, dry comfort of my car.  Yacht Basin Road cuts from the rolling surf of Bolivar Peninsula to the Gulf Intracoastal Waterway (GIWW), crossing a coastal marsh.  Birds can be easily viewed from both sides of the street.  There were no other vehicles on this day, so I was able to take my time creeping along and stopping to take photos through the driver's side window, which I kept rolled down except during the brief periods of rain. 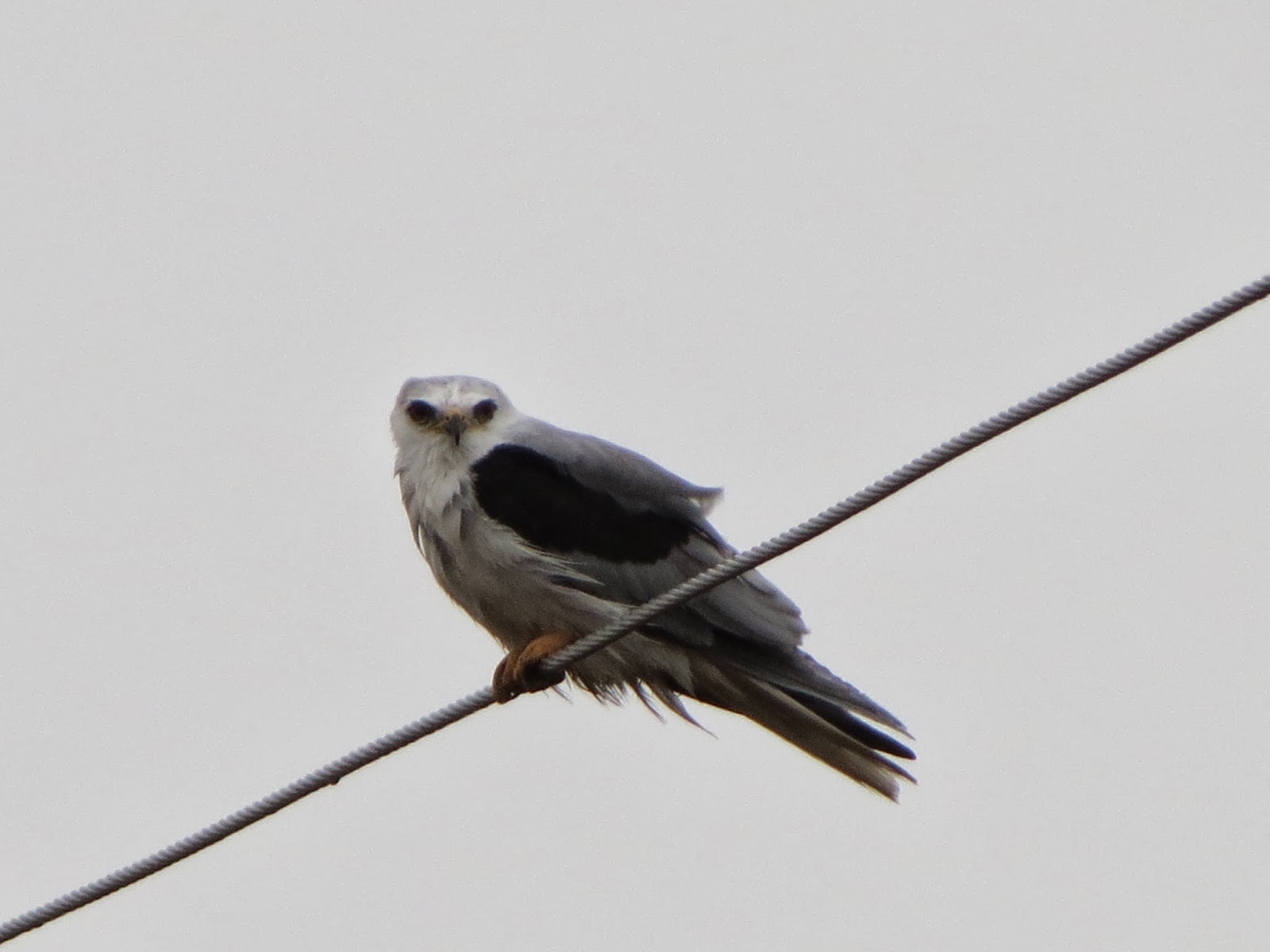 I looked up and spotted what I thought was an osprey perched on a power line.  It wasn't until I got home that I realized I captured something even better, a white-tailed kite.  I'm always excited to add a new bird to my life list. 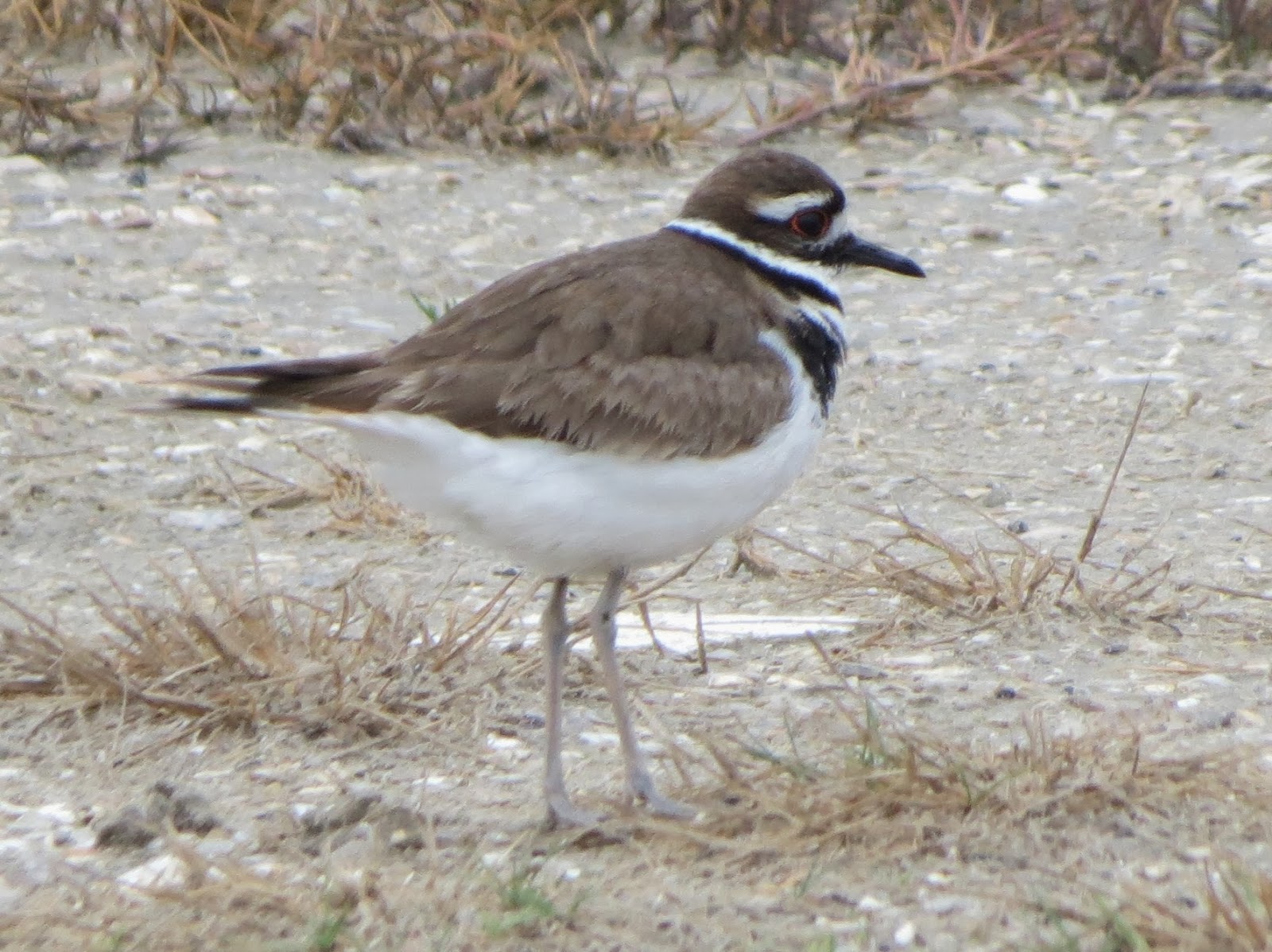 According to the map, there are many roads that cut towards the GIWW worth checking out and mentions three in particular.  I found the killdeer along Tuna Drive on someone's yard.  (The bird was, not me.  Don't trespass in Texas!) 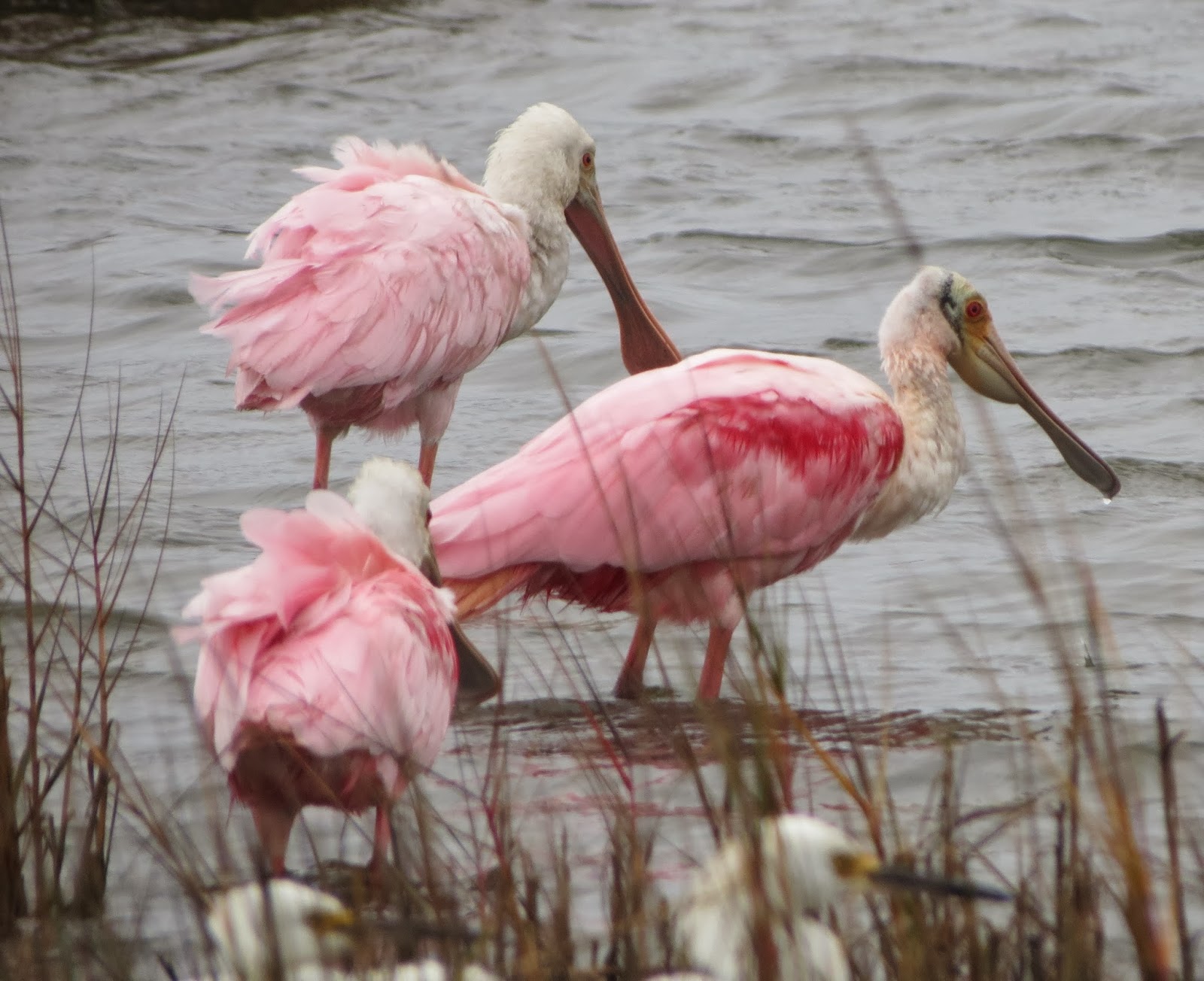 The Roseate Spoonbills are my Pink Saturday post.  I found them beside Bob's Road. 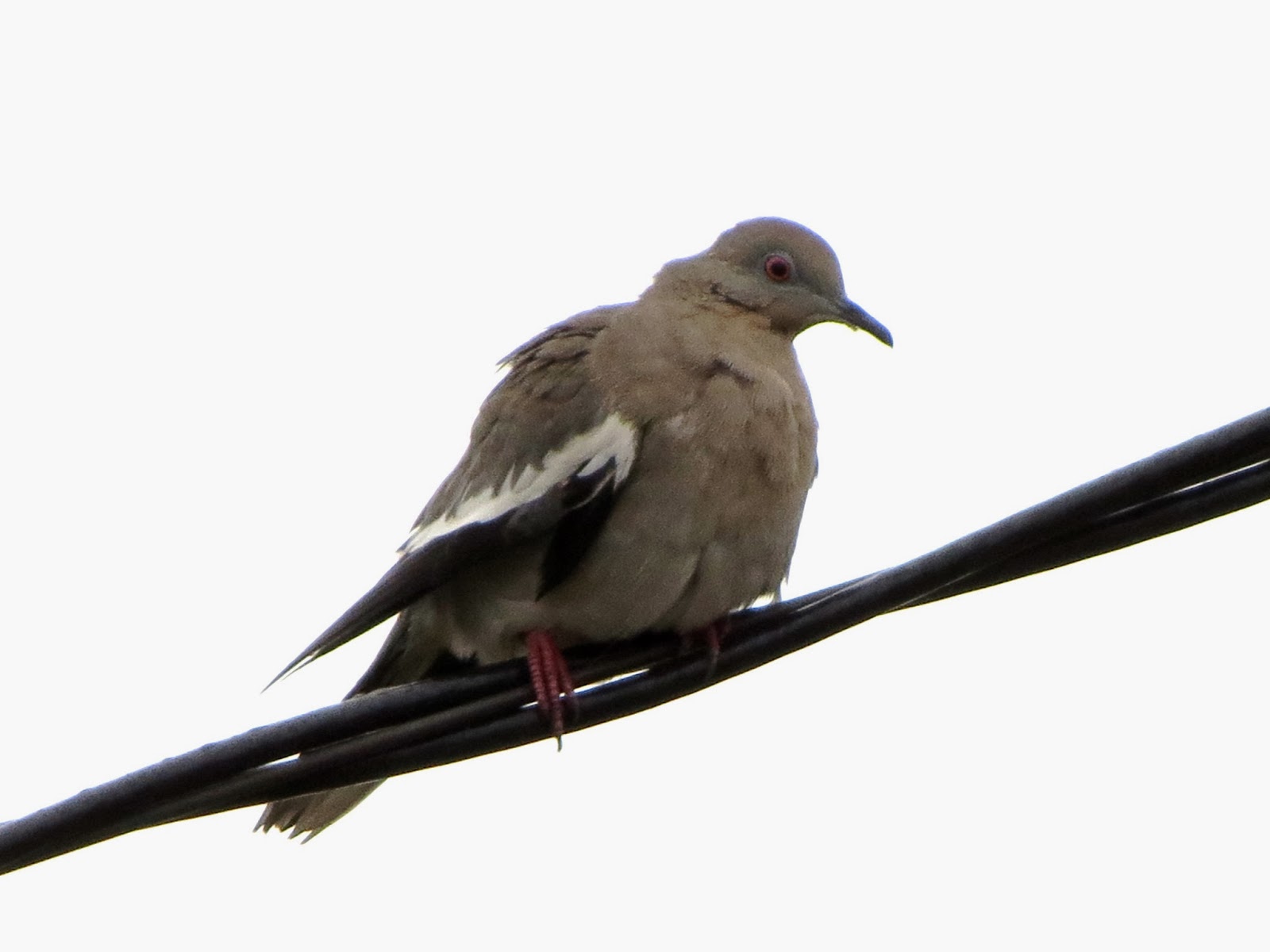 Finally, I photographed the white-winged dove on the power lines above Crystal Beach Road.  It was here that two nutria jumped out of the ditch no farther than four feet from my car and made a dash for a nearby pool of water. I was not quick enough with the camera to get pictures. 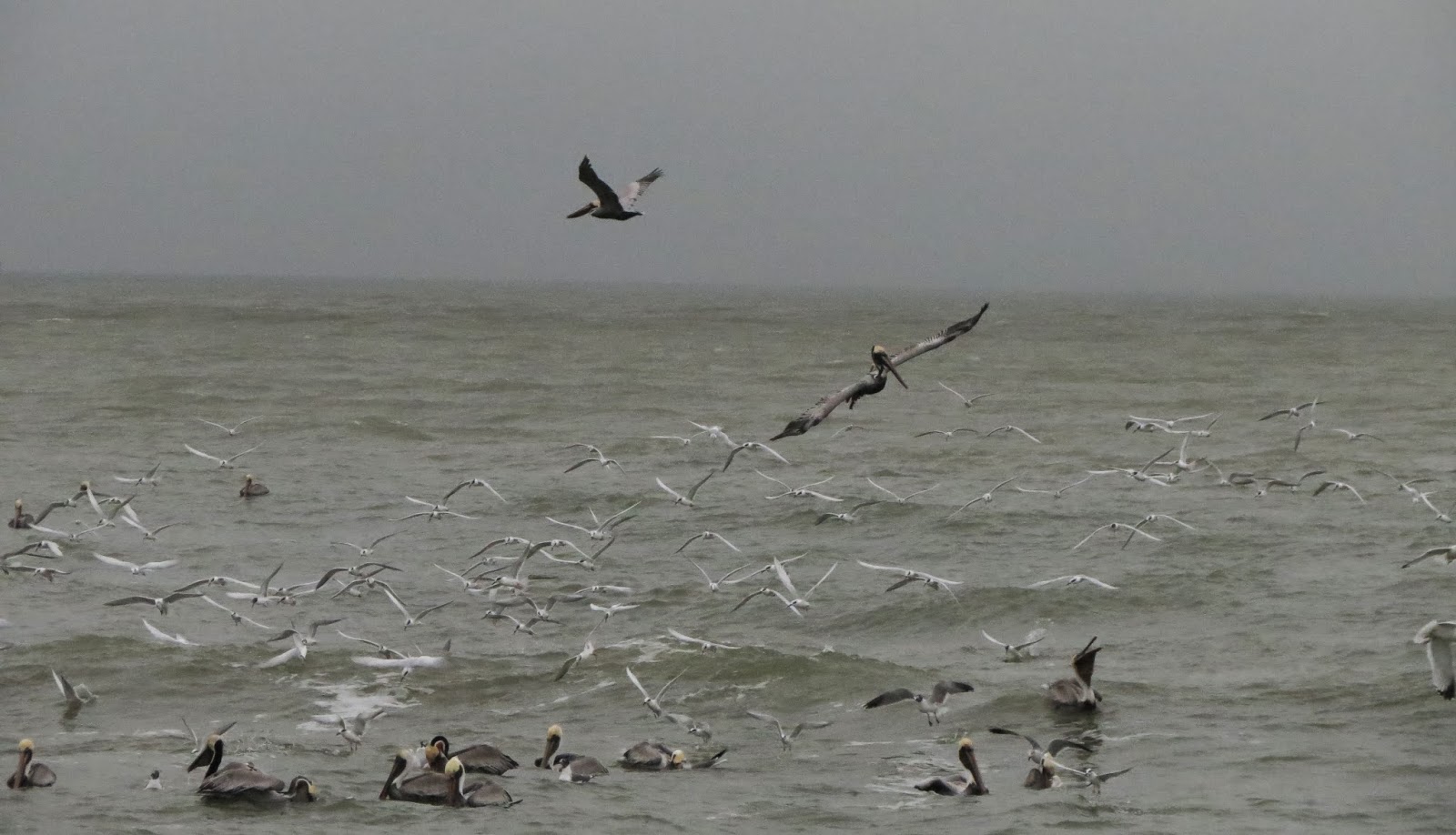 My visit to Rollover Pass, a man-made channel across Bolivar Peninsula, was not planned.  Enroute to Yacht Basin Road, I needed a pit stop.  I noticed a large group of brown pelicans and a couple of double-crested cormorants roosting on pilings. 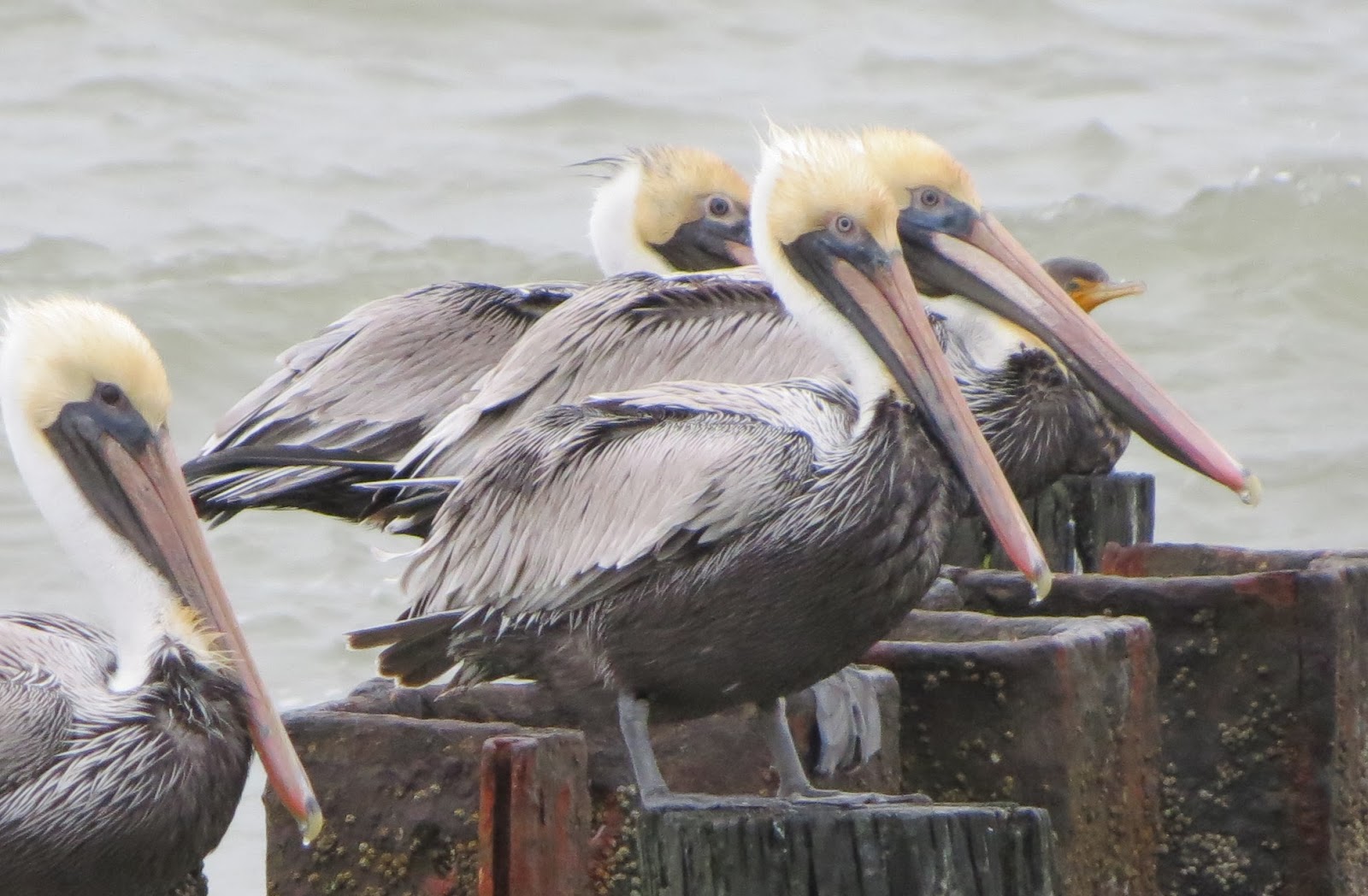 I moved closer and saw there were large numbers of pelicans, gulls, and terns in the surf.  They appeared to be feeding.

Tens of thousands of shore birds are supposed to gather here at low tide, and I was going to wait and visit then.  I was surprised to find so much activity here on a cold, windy, rainy day. 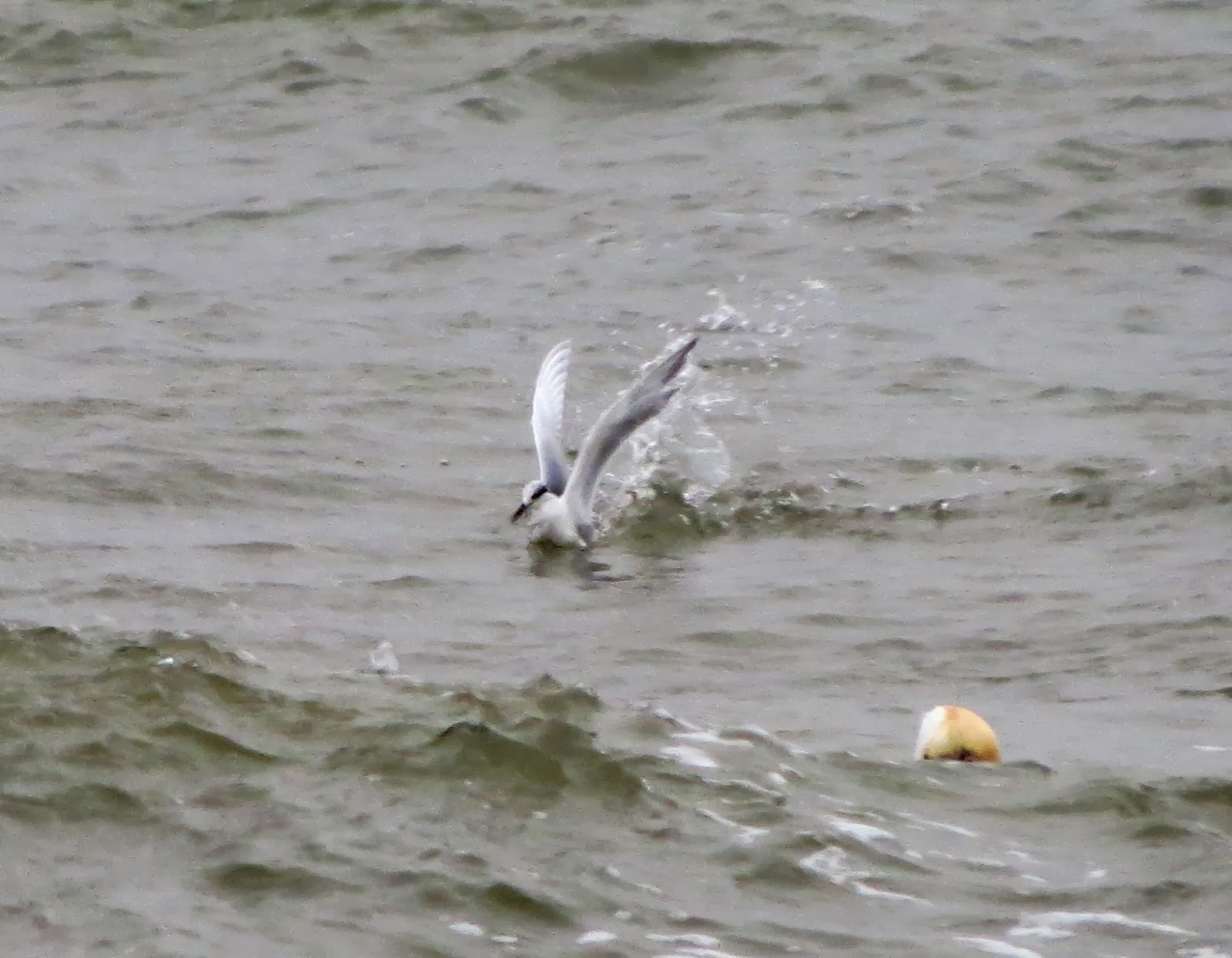 I think this is going to be one of those spots I can visit over and over, finding something different each time. 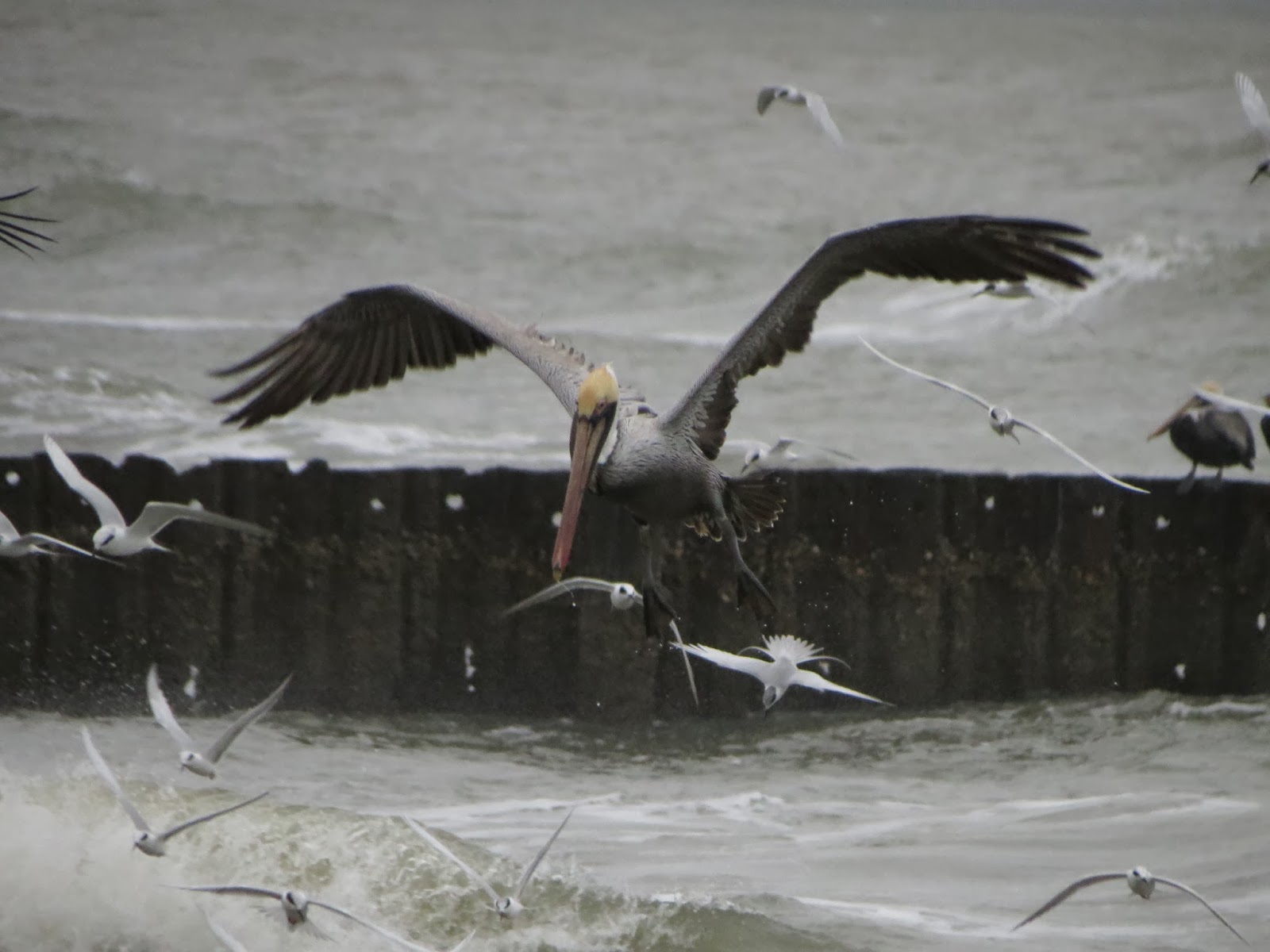 The original intent of this blog was to visit each site and post only once.  I might have to reconsider.  There very well may be some that are worthy of multiple posts. 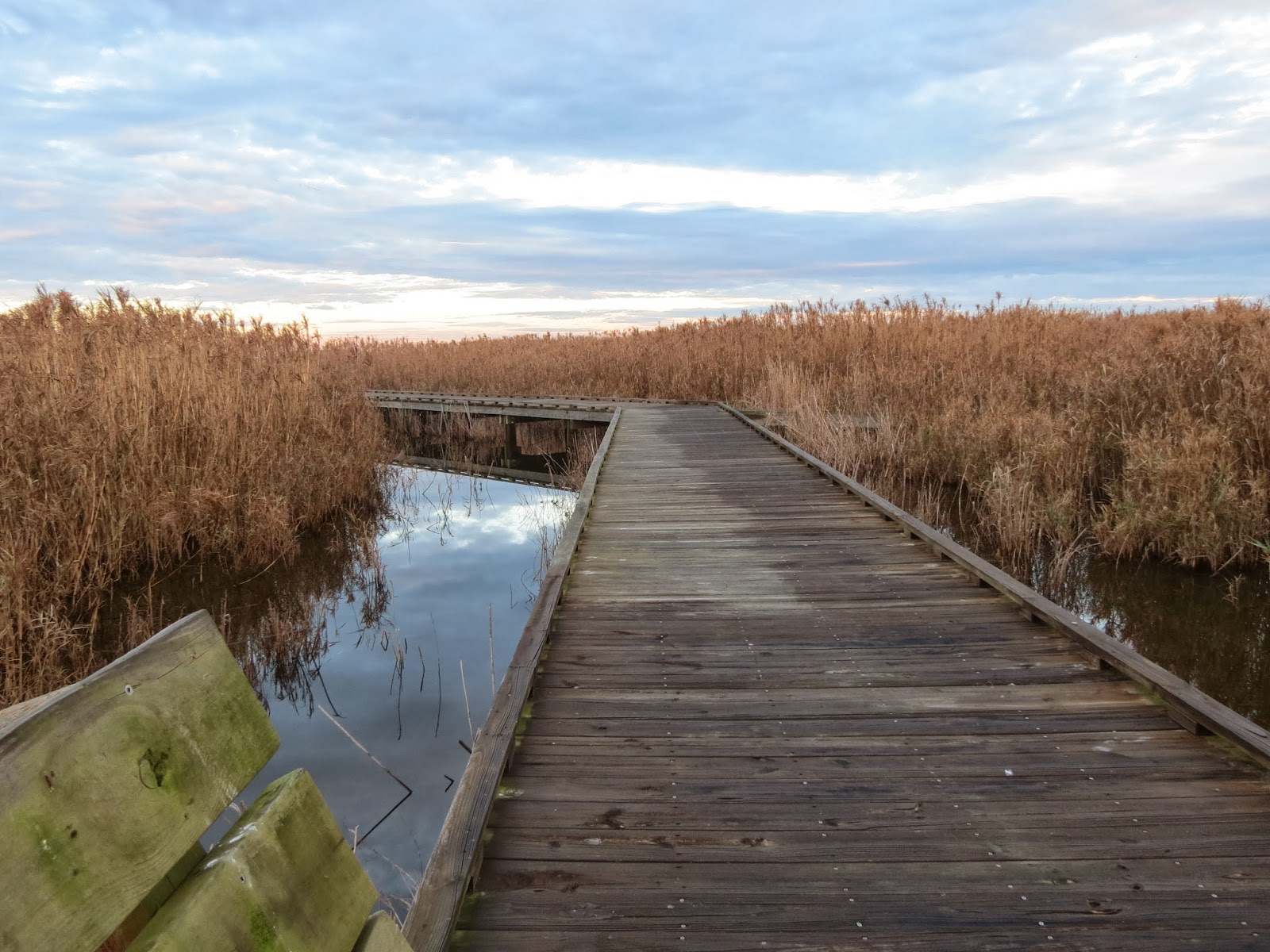 The original plan for this weekend was to visit Bolivar Flats at low tide.  The photography Meetup (visit Meetup.com if you're not familiar) event organizer wanted to visit when sunrise and low tide coincided. When he realized he made an error in reading the charts and was a day off, then the weather reports called for cold temps, Plan B was to visit Anahuac NWR.  We met at the Shoveler Pond boardwalk, pictured above.

The boardwalk is nice, but I saw more birds along the driving trail that loops around the pond.  The trick is to stay inside the car.  If you exit your vehicle, you'll chase the birds away.  Roll down the windows and creep along slowly. 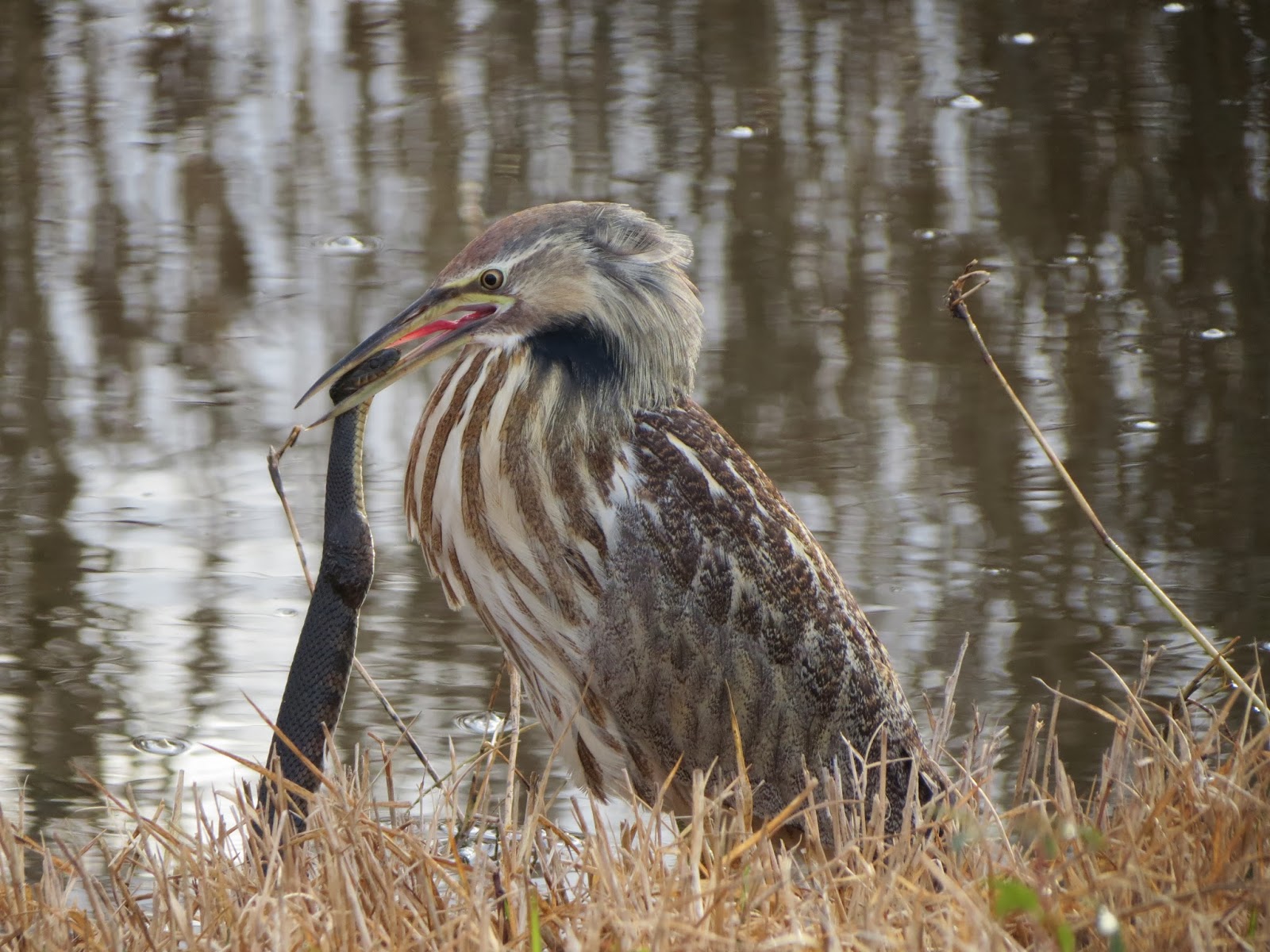 I was slightly intimidated at first.  I have a small case of camera envy.  It seemed everyone else had lenses longer than my arm.  At least one was a professional photographer.  I use a Canon Power Shot SX40HS, which is basically a point-and-shoot with a 35x optical zoom and a few more bells and whistles than less expensive models.  I can adjust the aperture and have several shooting modes, most of which I still haven't learned to use.

I think I was the only one to capture this American Bittern with his freshly caught meal, though.  Indeed, I might be the only one who even saw him.  They were busy taking amazing shots of the geese flying overhead that were out of my range.  I do a decent job of capturing birds that are a little closer to me, and my camera is easier to tote on long hikes.  That's what I'll keep telling myself. 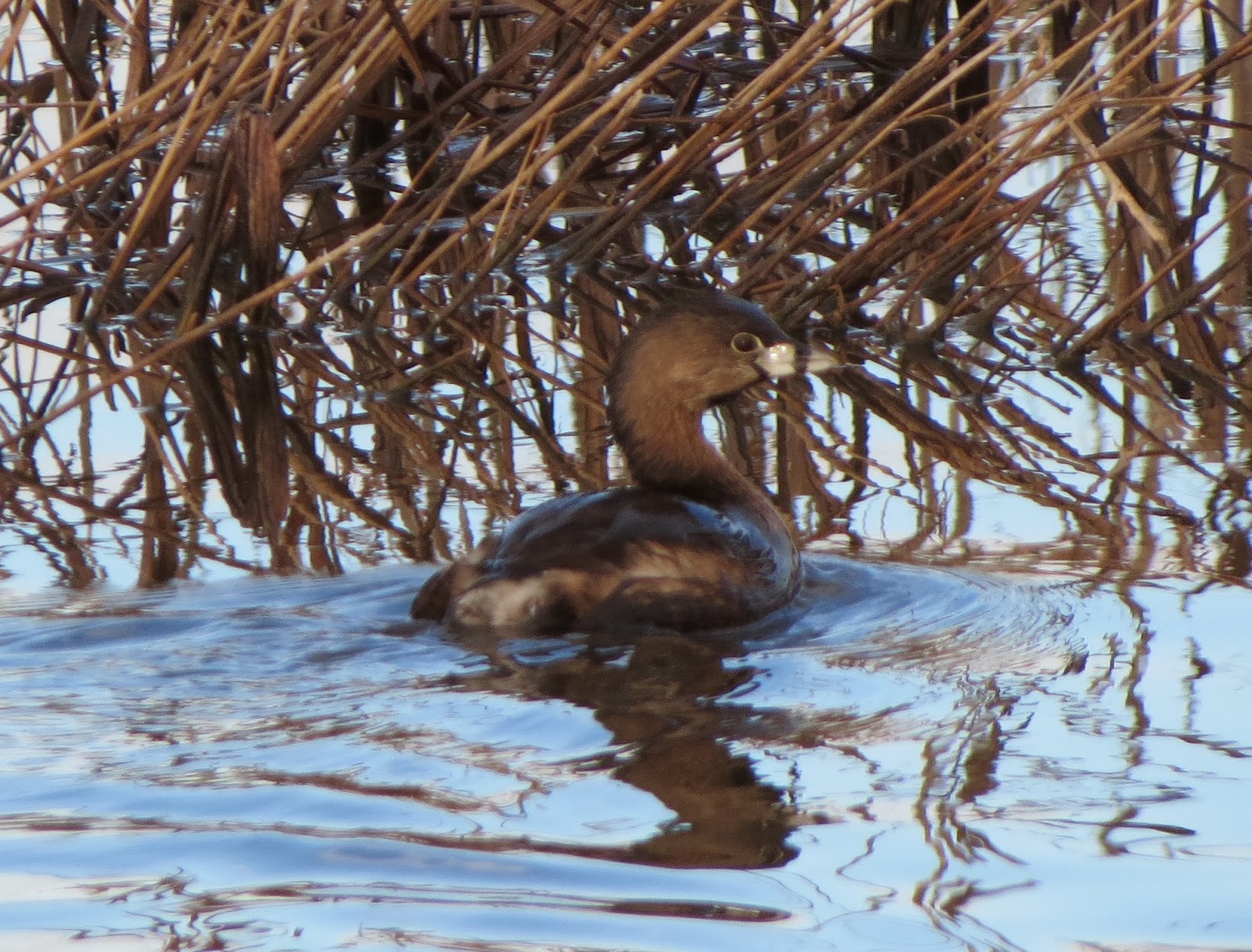 They did get shots of the Pied-billed grebe.  I think mine is comparable with most of theirs.

I knew it was a grebe because as soon as I spotted it, it disappeared under the water then eventually popped up somewhere else.  I had to be quick to frame and focus when he did or miss the shot. 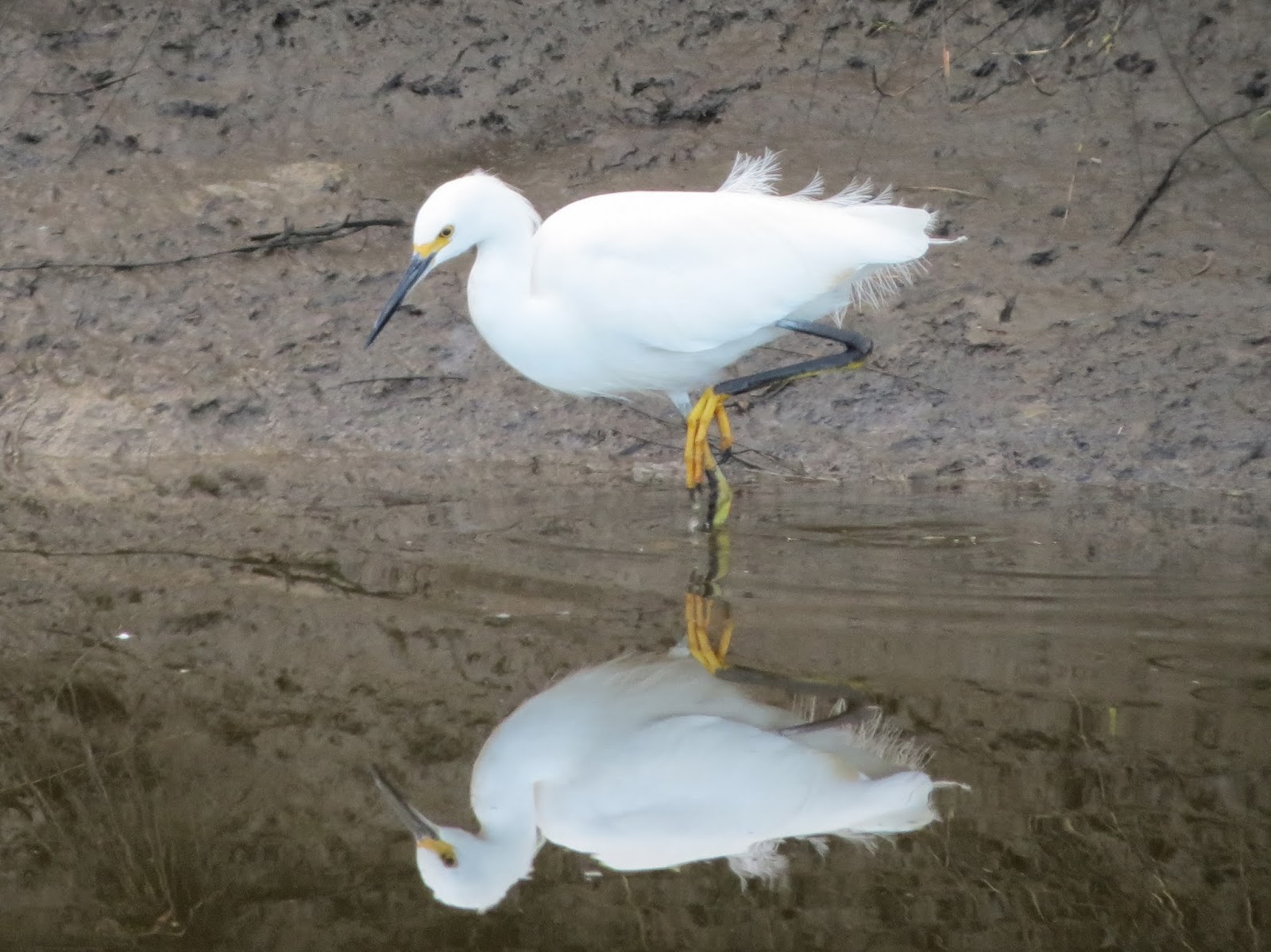 I'm proud of this one, a Snowy Egret, which is my Weekend Reflection. I didn't see any reflection shots posted on Meetup, so maybe this should be my contribution to the event album. 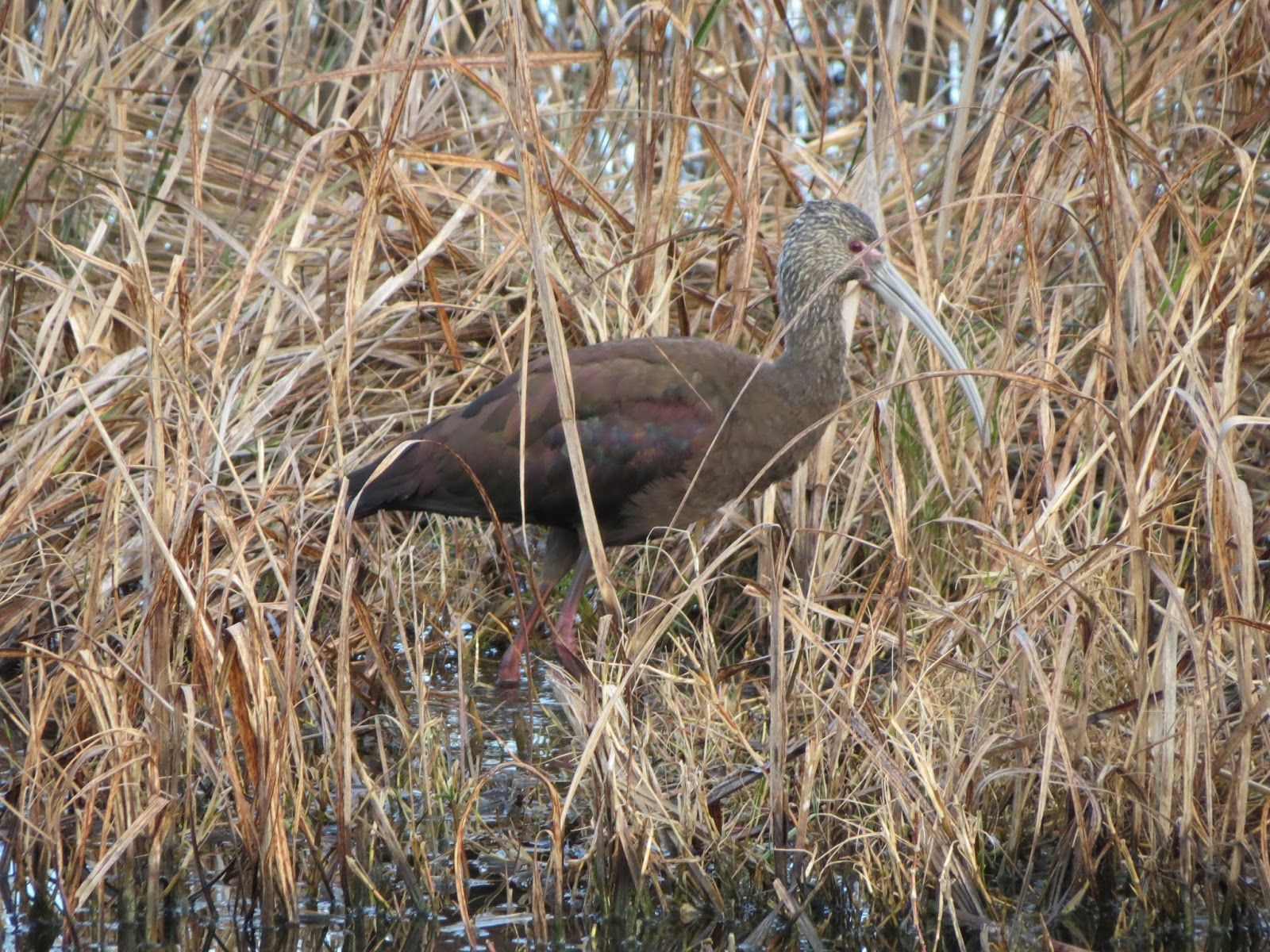 Shortly after I captured the White-faced Ibis, my camera battery died because I forgot to charge it the night before.  I should buy a spare in case I forget again - or end up somewhere with no electricity for several days.