The first weekend in October, I celebrated my birthday by taking Friday off work and heading south in search of yet another rare bird.  Yes, I've been doing a lot of that lately.  This one has been seen in the evenings, so I allowed myself to sleep in.  I took my time having breakfast, packing, doing a few chores so I wouldn't come home to a filthy apartment, and I was off to the Brooks County Rest Area, aka the Falfurrias rest stop.  I arrived in the late afternoon.  Sitting at one of the picnic tables, watching me, waiting to be noticed, was one of the most beautiful birds I have ever seen. 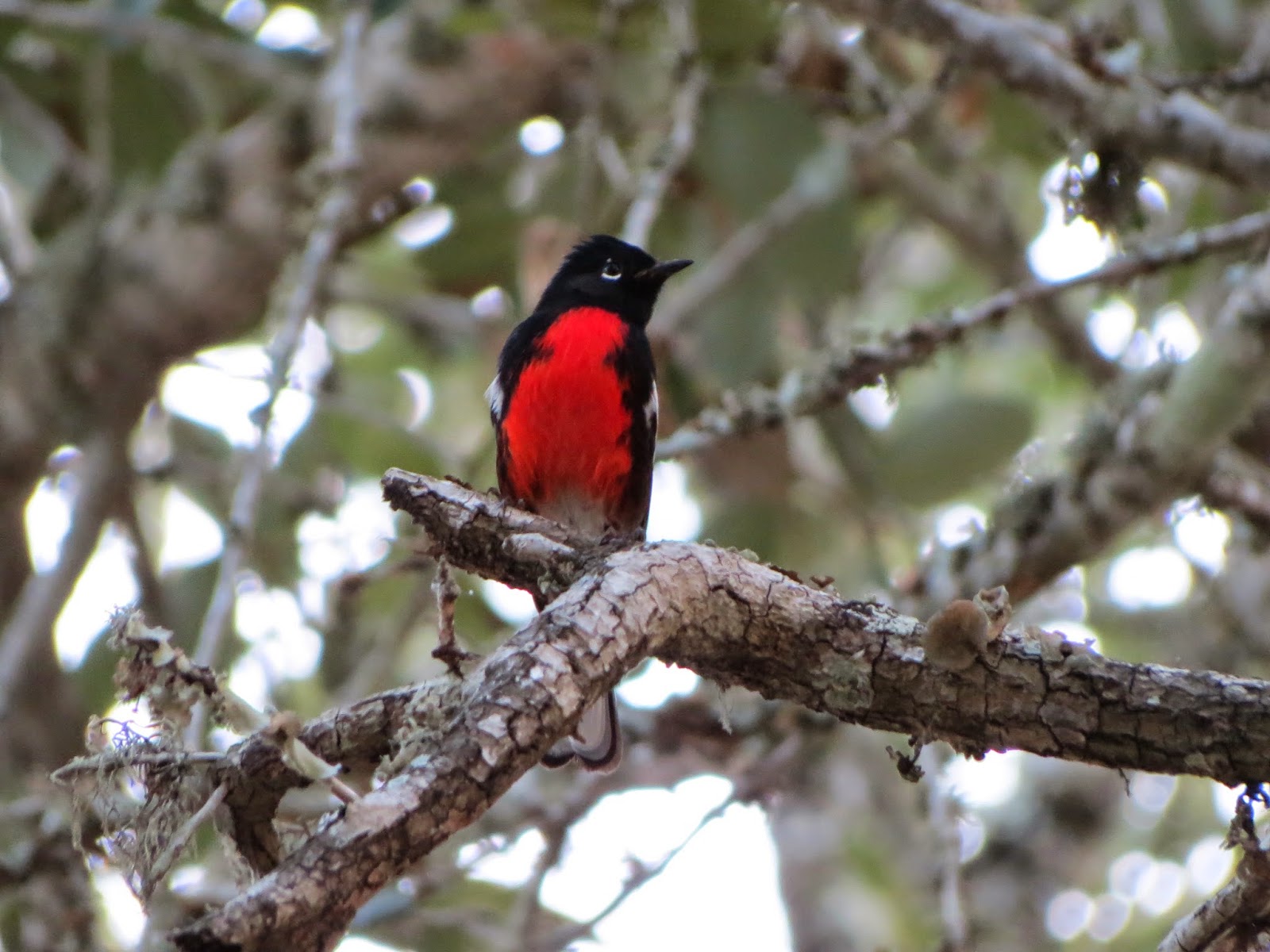 The Painted Redstart is a western species far from his normal range.  It has been said he might be the same bird that spent a couple of months here last year.  I think it has to be.  What are the odds of two individuals finding their way here?

I took several photographs before he flew off into the trees.  He didn't go far, though, and I swear he expected me to follow.  He seems to know he's the main attraction.  Someone remarked on the Texbirds sight that he is "quite a ham".  I agree.  He even sang his beautiful song right to me. 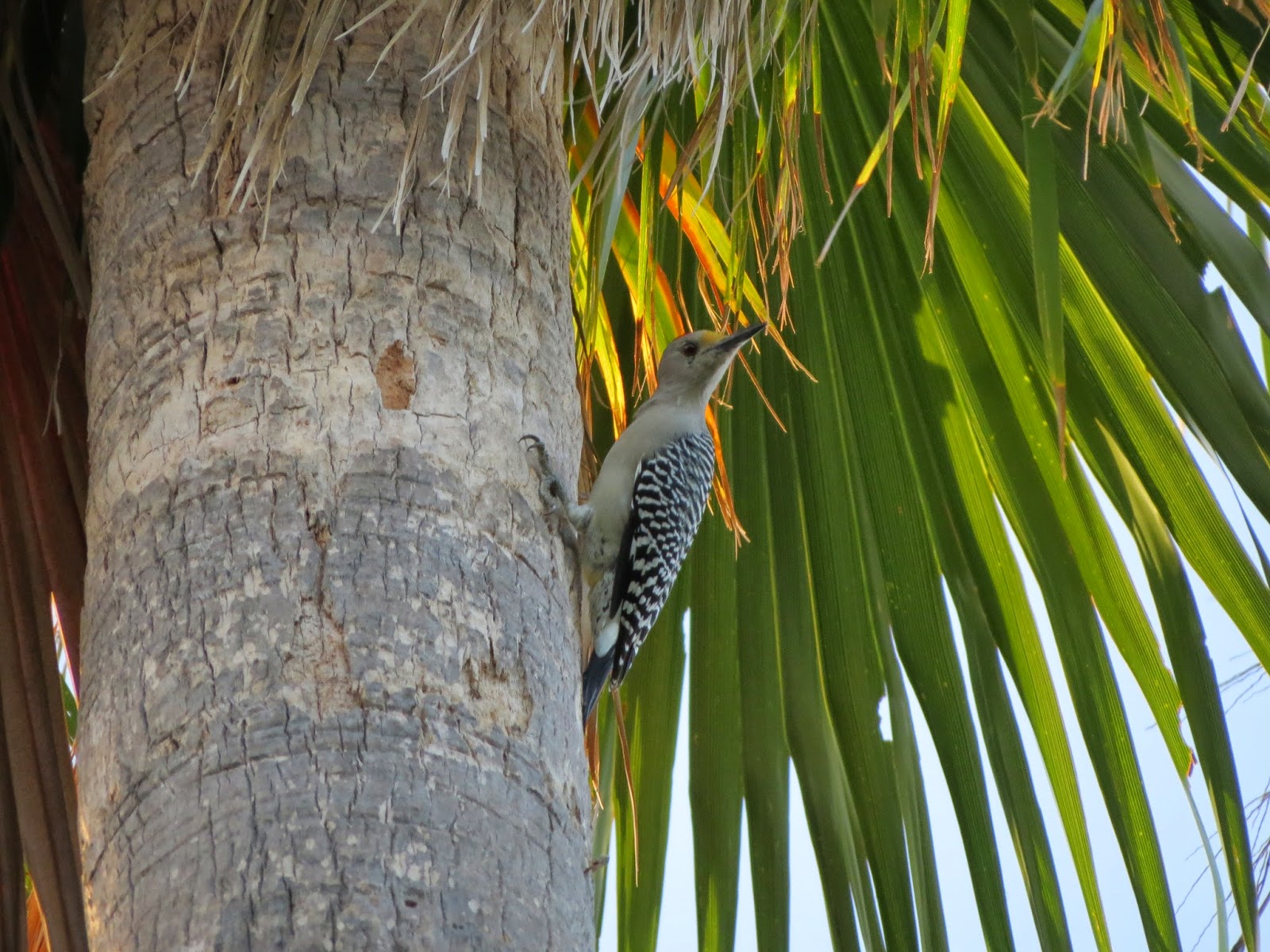 I spent a little time admiring the redstart, then took a look around the rest of the site.  I'm normally excited to see woodpeckers, but I was trying to photograph a Green Jay.  I'd focus, push the button, and then the jay was gone, a Golden-fronted Woodpecker in his place. 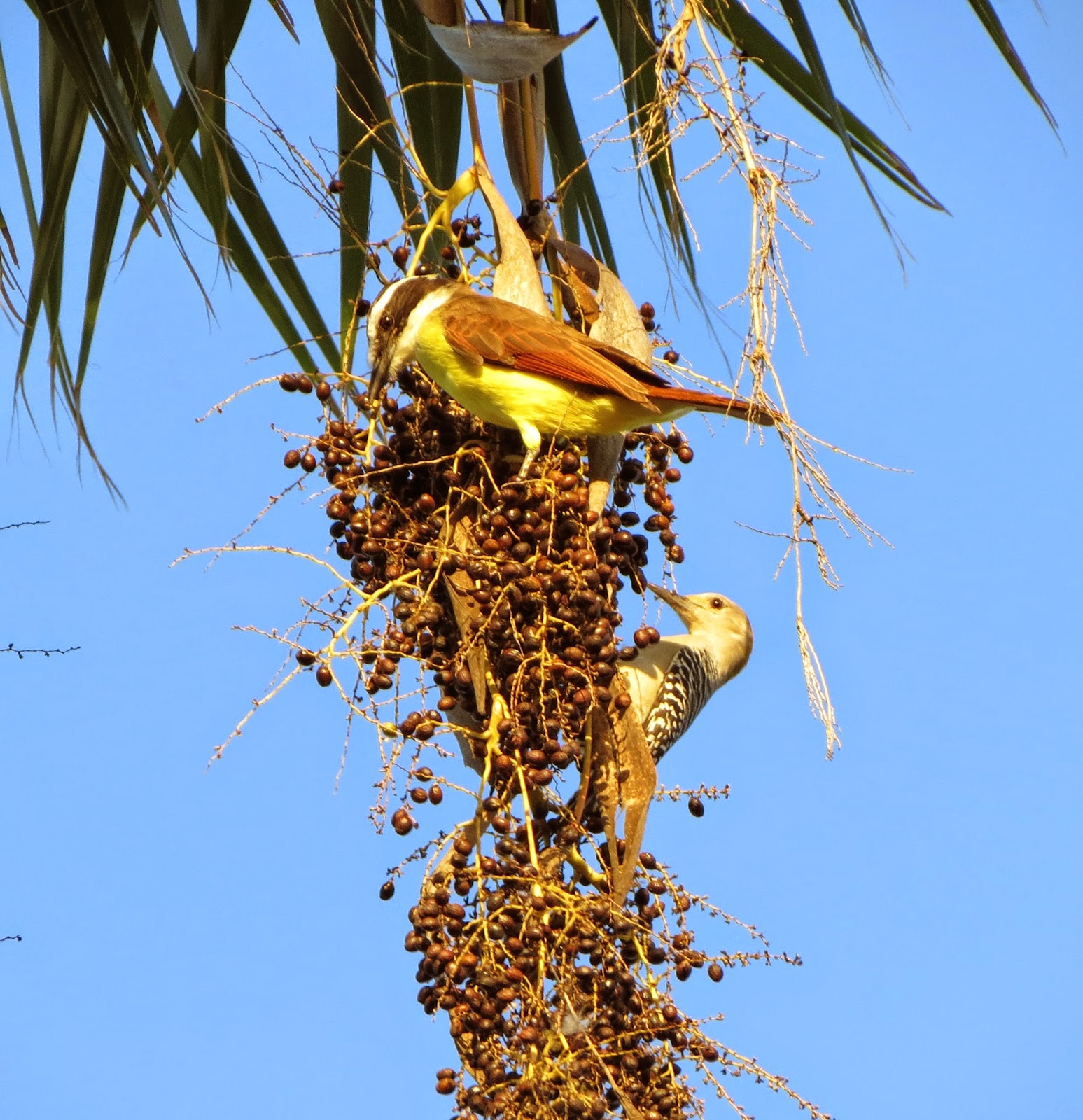 The woodpeckers were after the Great Kiskadee, too.  They didn't want to share the fruit hanging from the palm tree.  He wasn't here long before they ran him off.  He returned several times to steal a bite or two at a time. 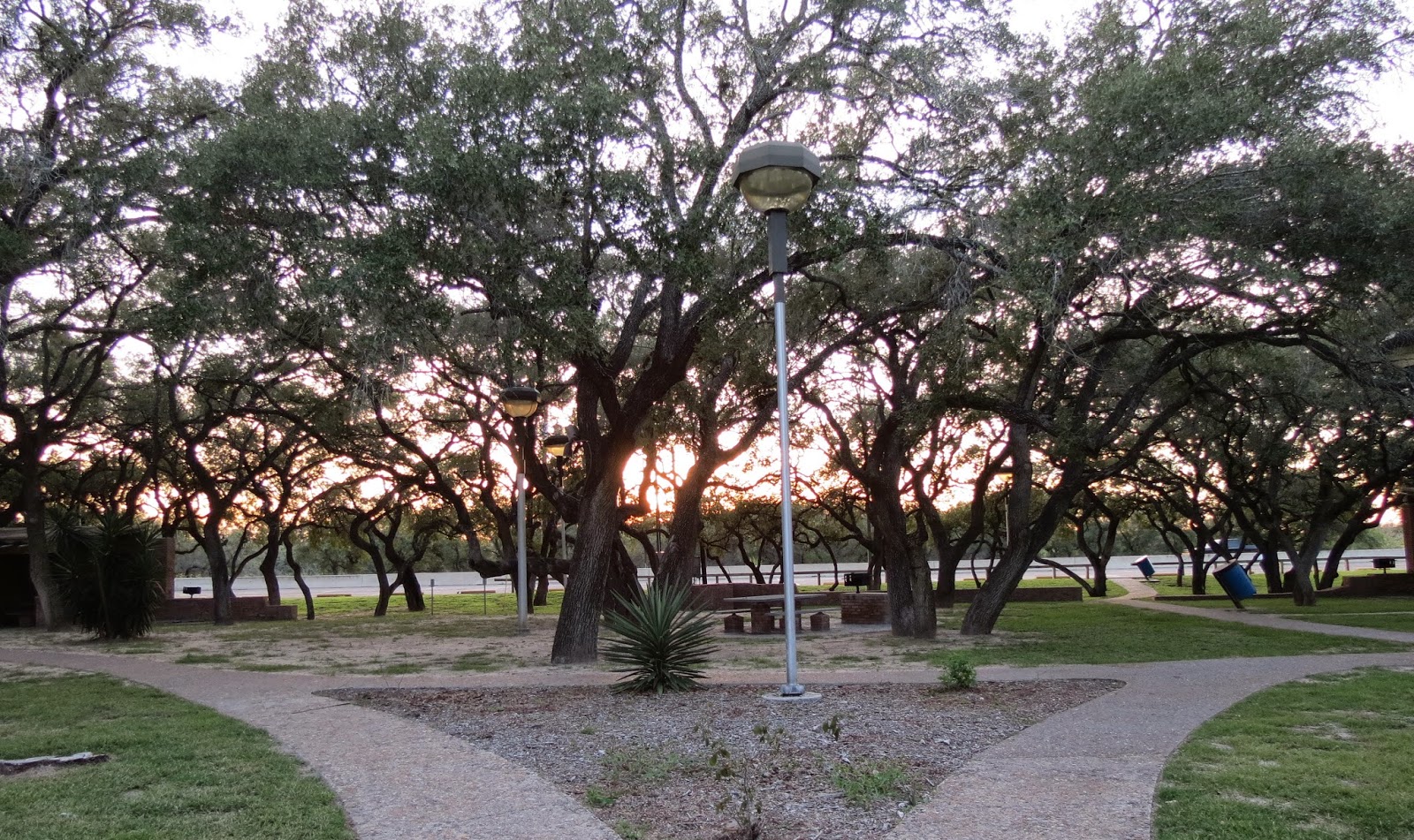 I stayed until sunset on Friday, enjoyed my dinner in the picnic area, and found a hotel to spend the night before heading further south in search of Rio Grande Valley specialties. 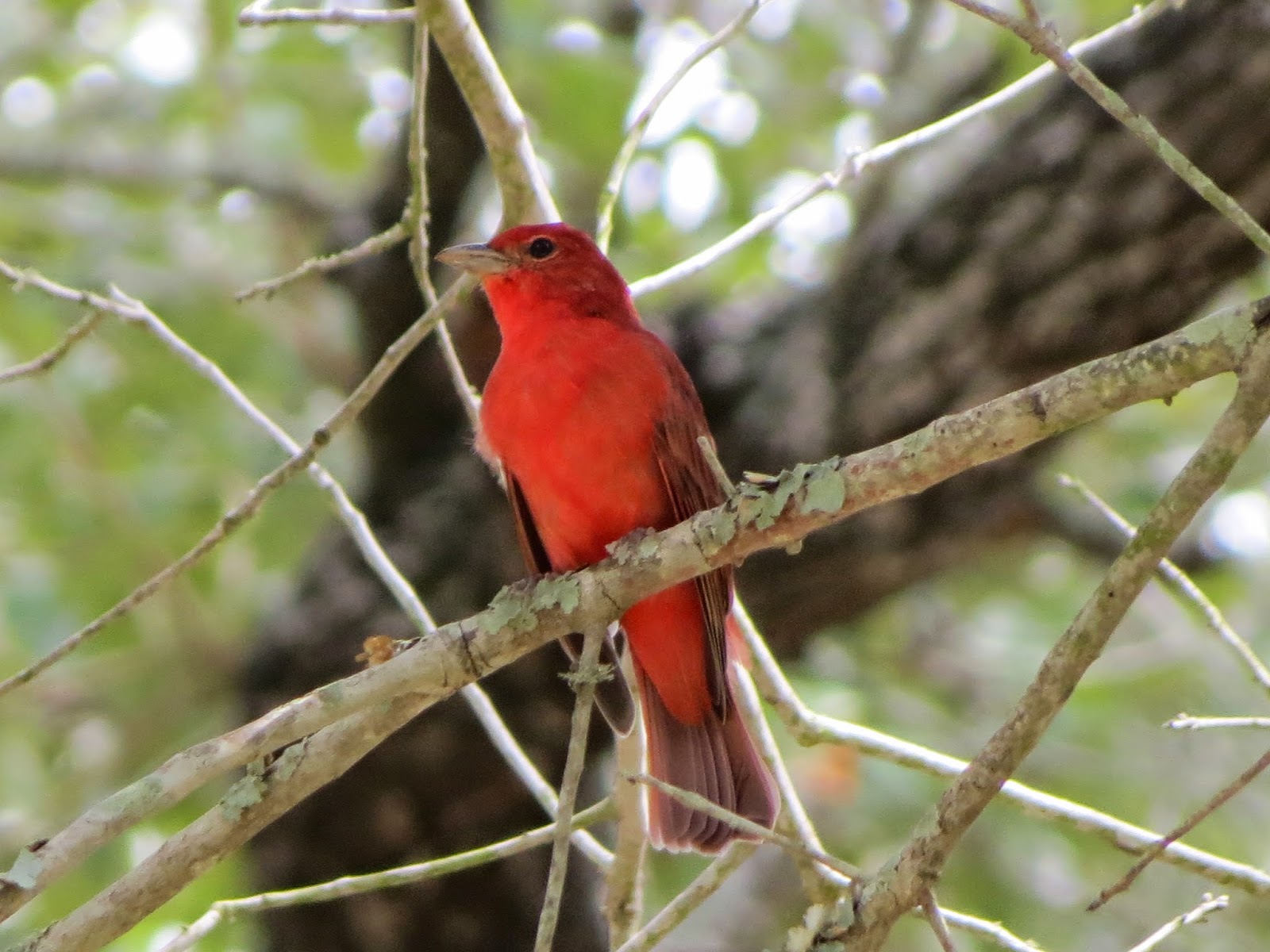 I stopped by again on my way back north and found a Summer Tanager.  The woodpeckers were still chasing the Kiskadee, Jays, and Kingbirds, and the Redstart was still there.  I saw some people who looked like birders - they're the ones with binoculars, staring up at the trees - and decided it was my chance to pay it forward.  So many have been helping me, and it was finally my turn to be helpful.

"Are you looking for the redstart?" I asked.  "I just saw him beside the restrooms," and I led them to him.

Add this site to my short list of favorites.  The birds seem active all day.  I think I'll be stopping here every time I head south on US281.

I'm linking up this week with Wild Bird Wednesday.

I wasn't sure I'd found a separate park so I had to do a bit of online research to confirm.  The path below leads all the way to Hans A Suter Wildlife Area, and it's difficult to say where one ends and other begins.  After failing to locate the Godwits earlier in the day at Suter, I explored Oso Bay Park until sunset. 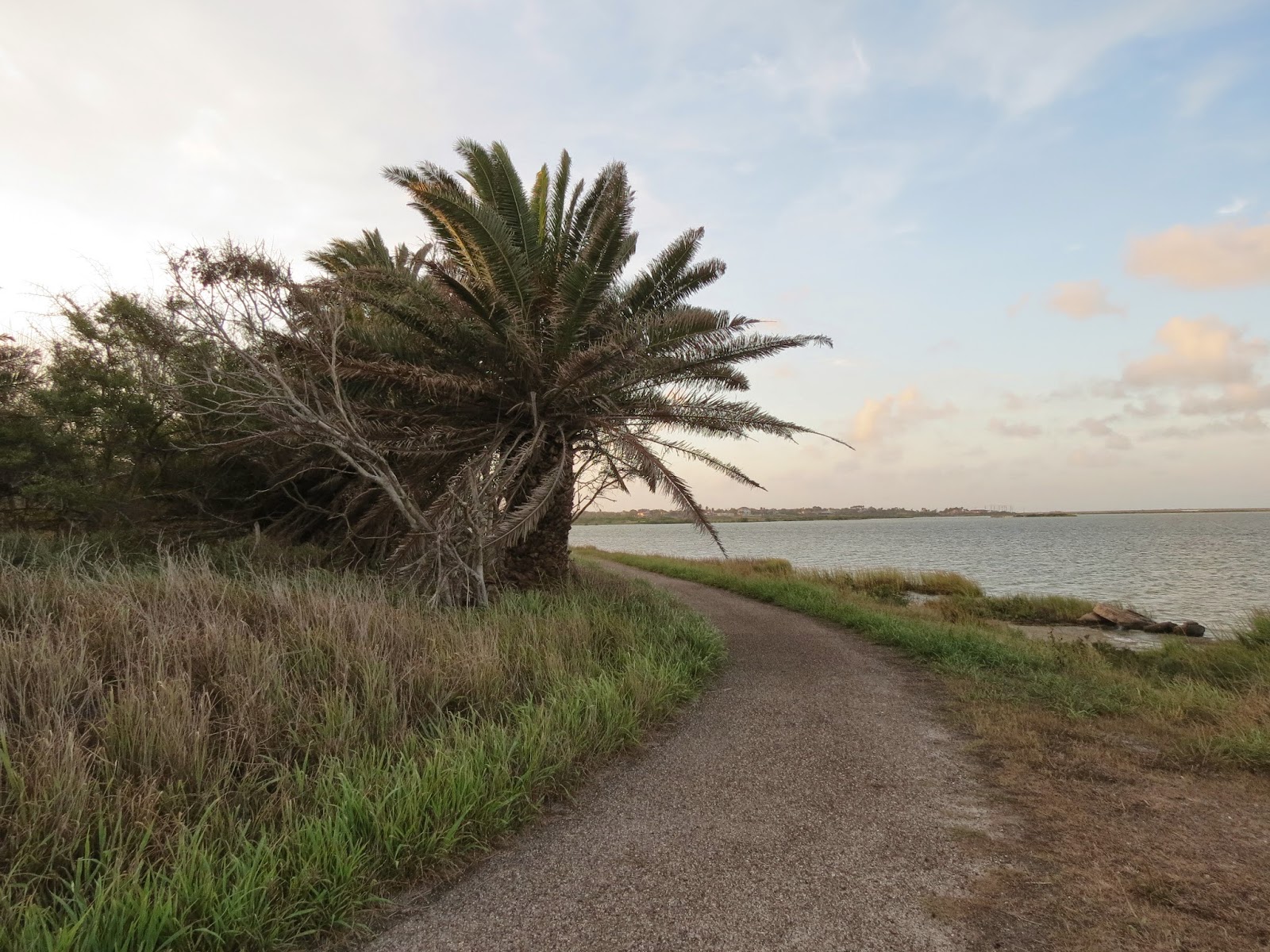 There were flyovers of Spoonbills, Cormorants, and Ibis.  A Willet hunted in the surf. 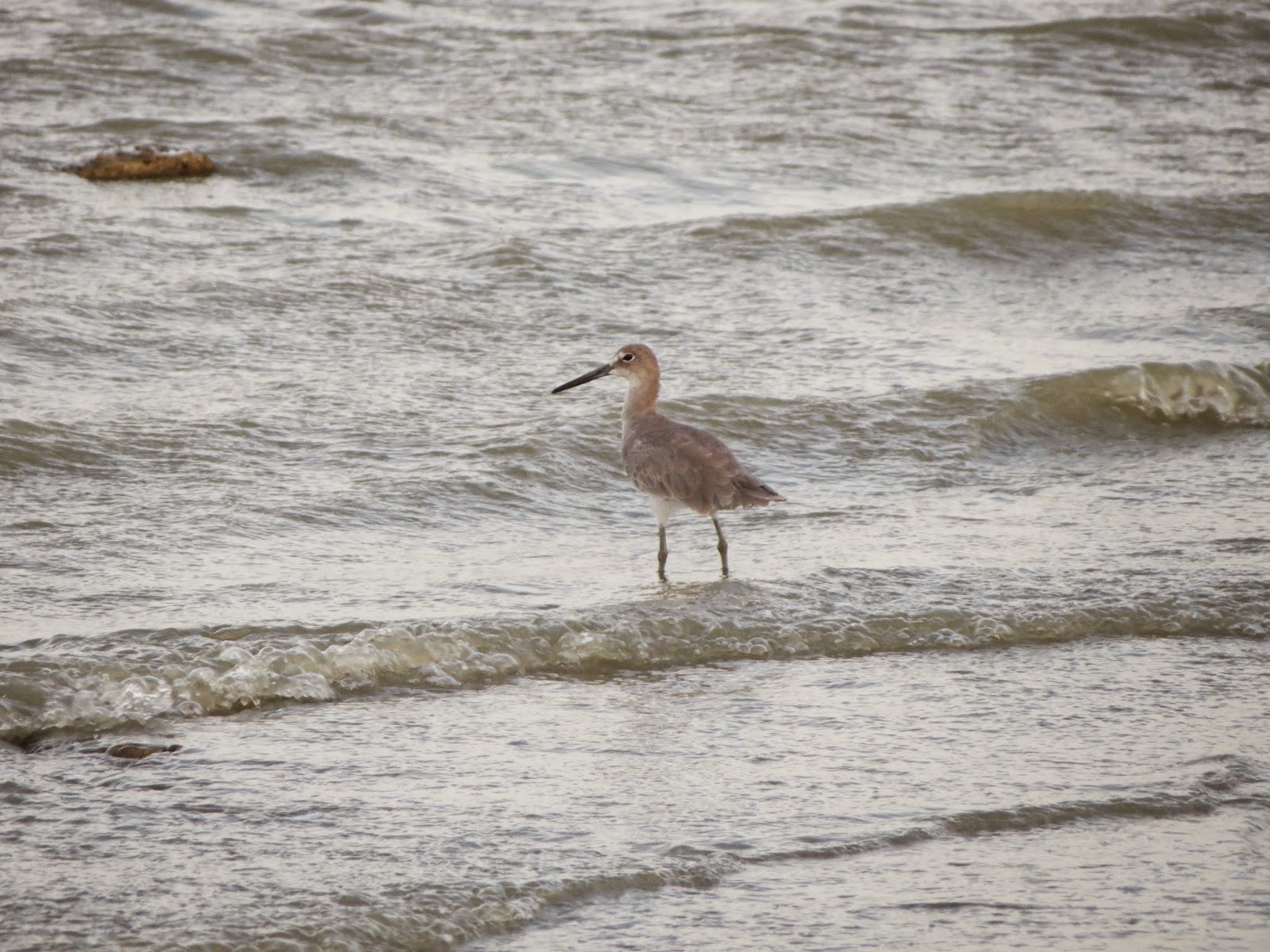 I also found a Semipalmated Plover... 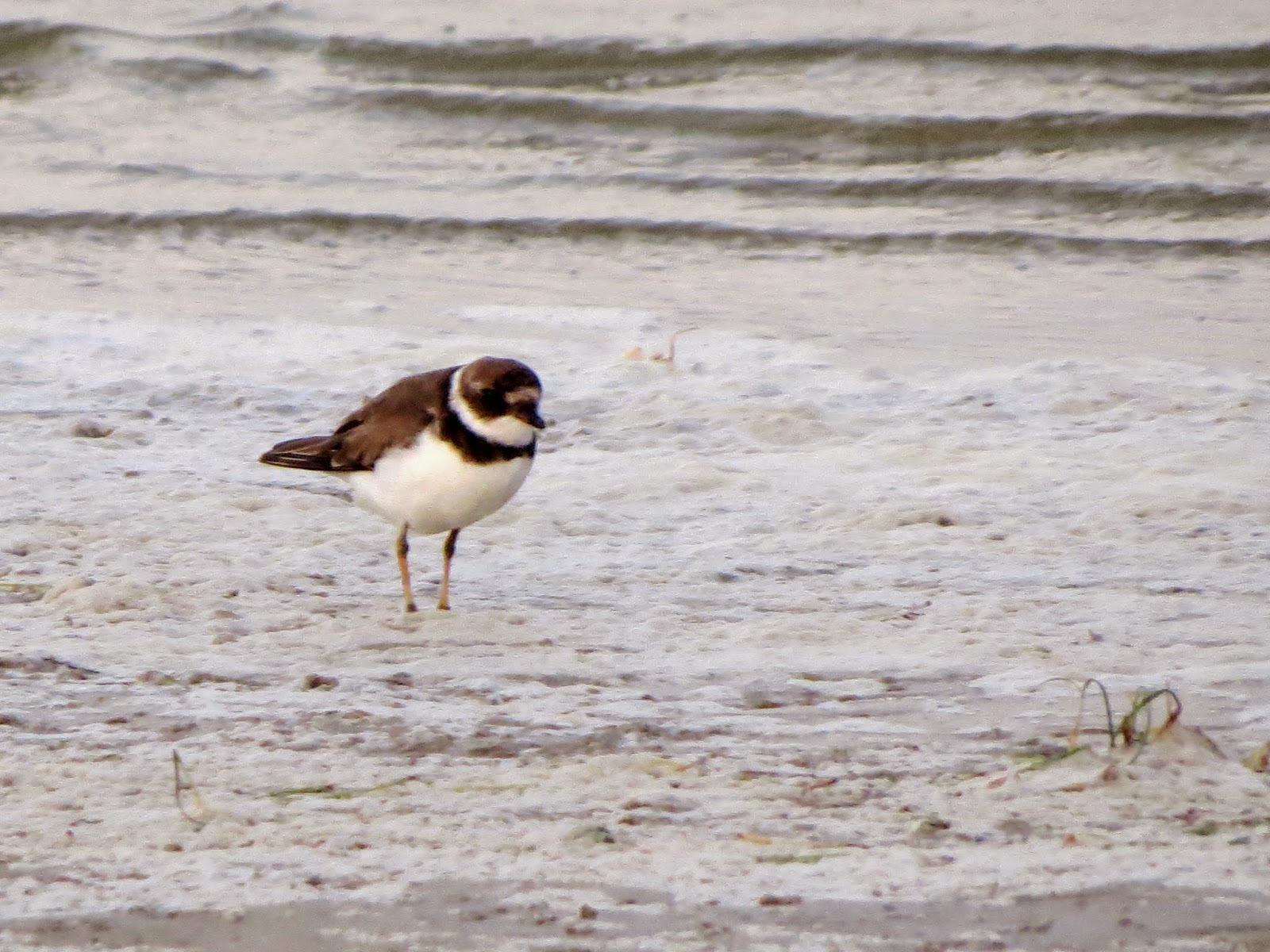 ...and a Western Sandpiper, but no Godwits. 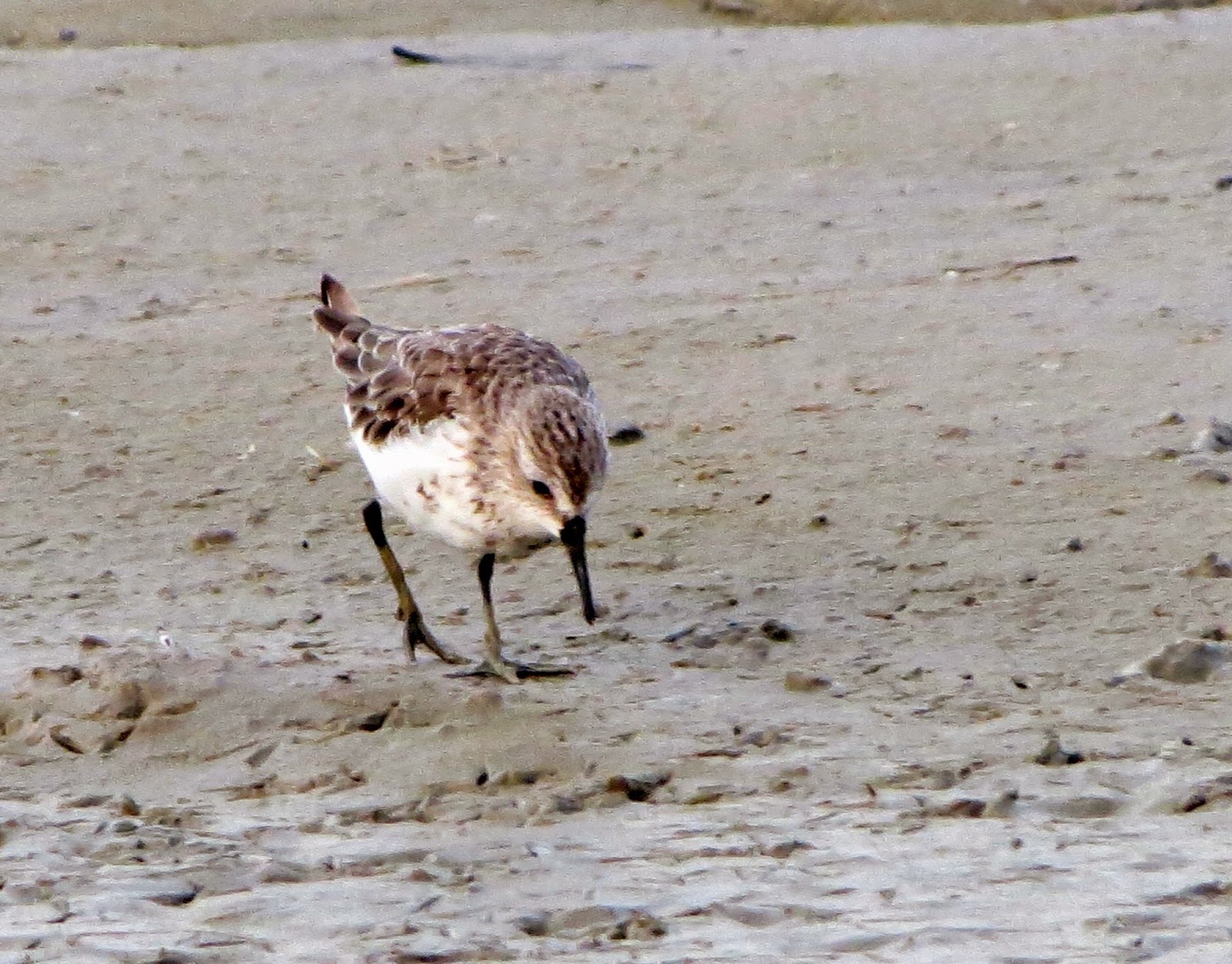 These little peeps are challenging to identify.  I took a second glance at this one's legs and thought they might be yellowish, then remembered they were muddy.  I have other photos in which I can see the bill is slightly downcurved.  Black legs plus downcurved bill equals Western Sandpiper. 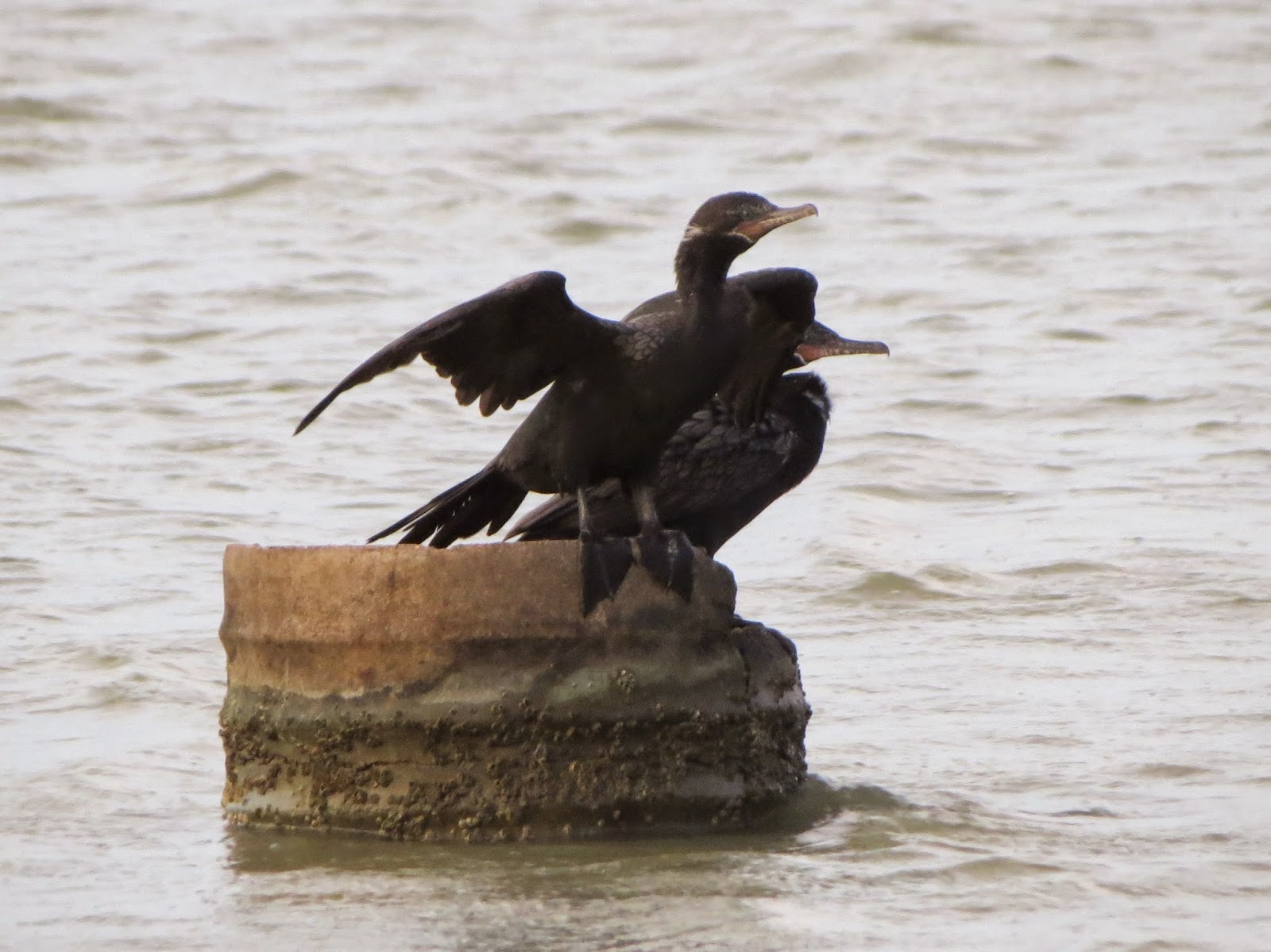 The Neotropic Cormorants used large pieces of debris scattered about the bay as perches.


I'm linking up this week with Camera Critters.

Oops!  I just realized I posted out of order again.  I still have a couple of August posts to make.  The weekend of August 31 I made a trip to Corpus Christi in search of another rarity, the Bar-tailed Godwit that had been seen around Oso Bay.  Whether or not my trip was a success depends on your definition.  I visited two more sites of the Great Texas Coastal Birding Trail, which is the original purpose of this blog.  I did not get the added bonus of a rare bird sighting.  Not this time, anyway... 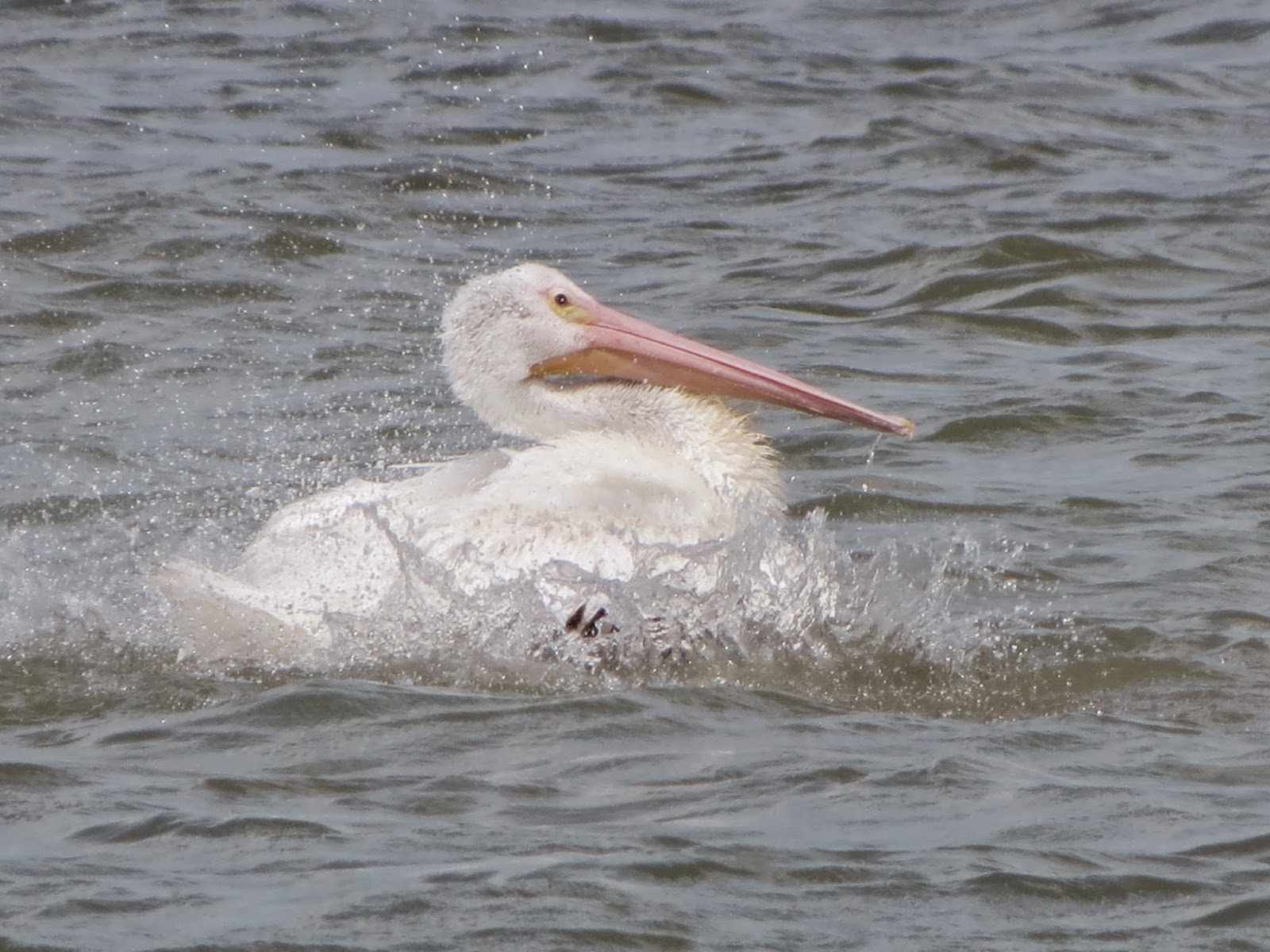 Splashdown!  The America White Pelicans had already returned.  A local man at the wildlife area told me they arrived more than a month ago.  I'm learning not to take the descriptions of best season to visit these sites too literally.  The birds don't.  Winter species can be found in July. 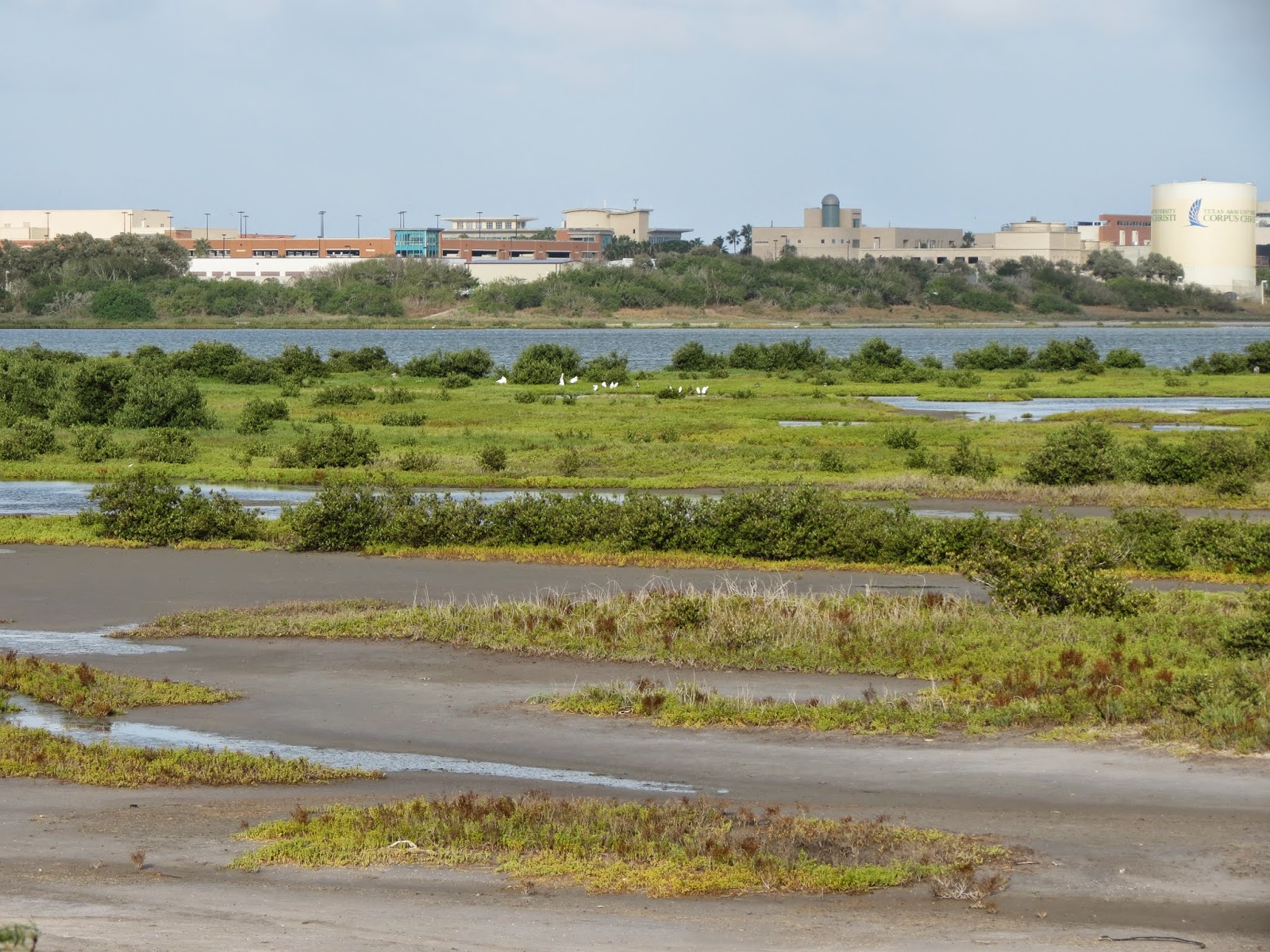 This photo of Oso Bay was taken from the railing on Ennis Joslin Road.  I not only visited Hans Suter, I accessed the flats via a small footpath worn into the weeded area on the roadside.  That's Texas A&M on the other side.  I found egrets, herons, terns, gulls, and skimmers on the sand and in the shallows. 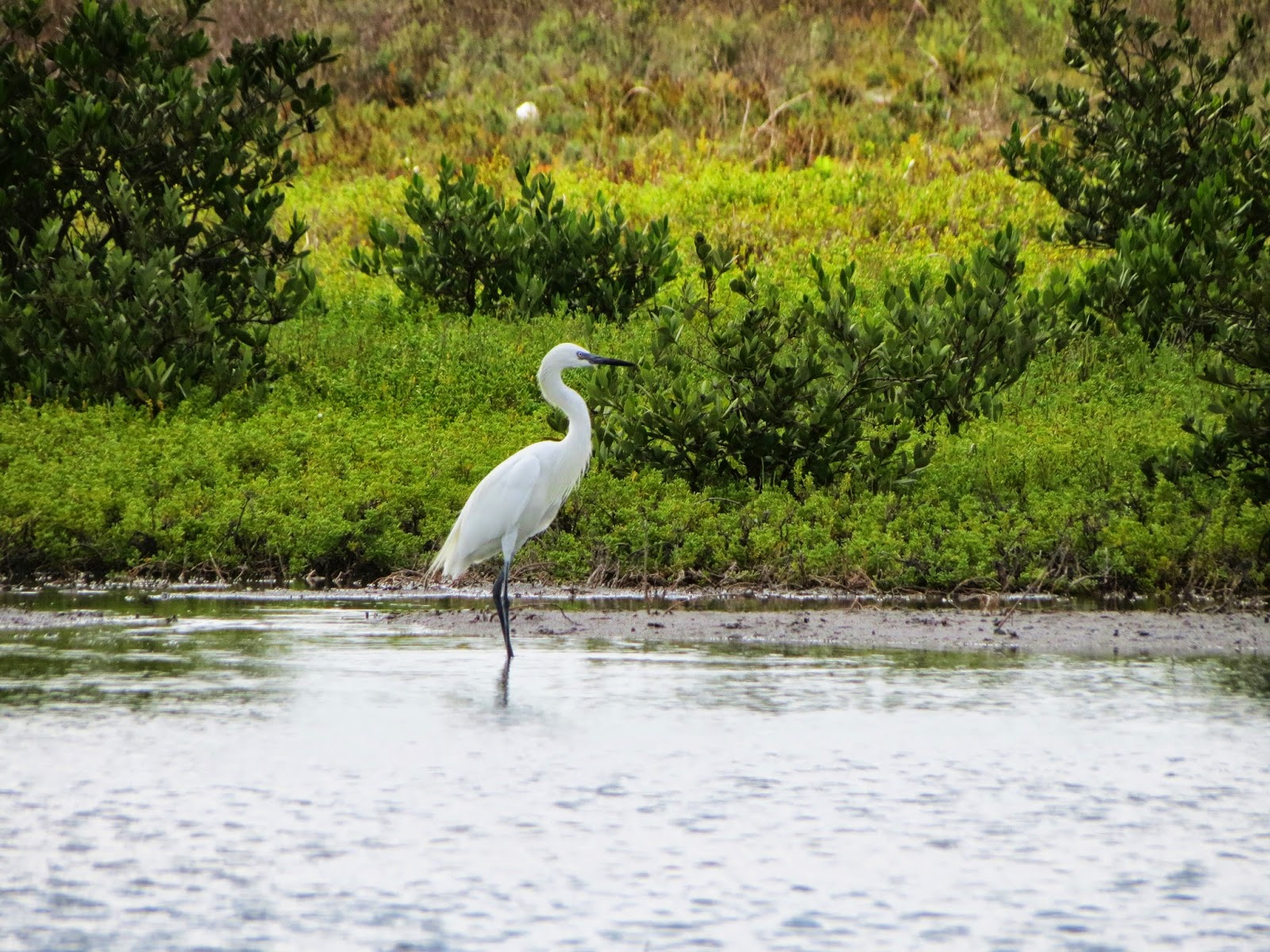 At first glance, I thought it was a Great Egret, but the bill was wrong.  It didn't have yellow feet, so it couldn't be a Snowy.  I studied my field guides and decided it must be a juvenile Little Blue Heron, but the leg color still wasn't quite right.  Then, I saw a similar bird on Hootin' Anni's blog.  Due to it's size and dark legs, I'm calling it a white-morph Reddish Egret.

The Great Egret is below, for comparison.  I found him near the overpass on Ocean Drive. 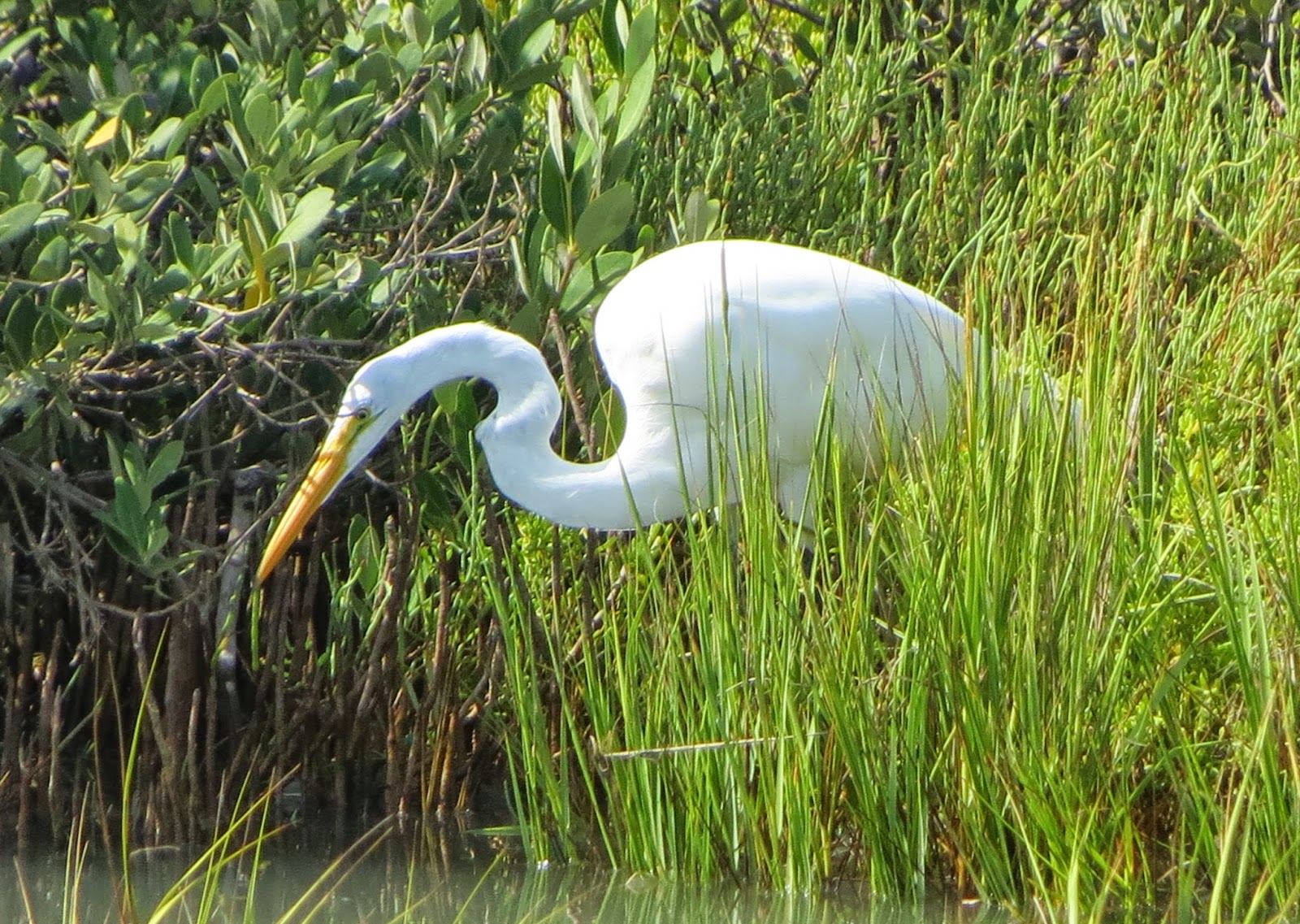 I walked all the way from Hans Suter, up onto Ocean Drive and the bridge that crosses Oso Bay, to Texas A&M in search of the Godwit.  I didn't find him or the Marbled Godwits with which he'd been seen. 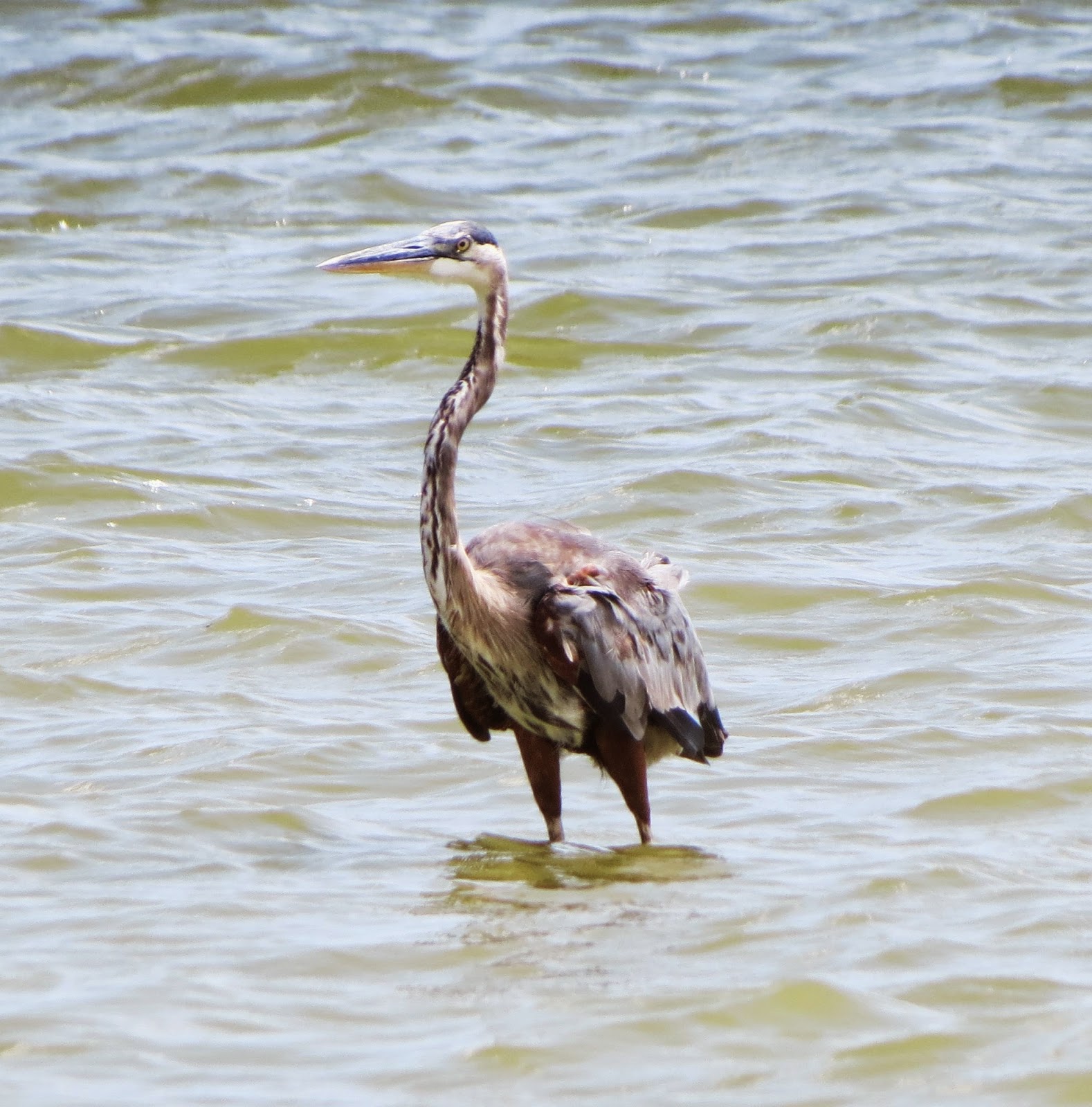 One last visit to the boardwalk and viewing area at Hans Suter before I left rewarded me with views of the Great Blue Heron, pelicans, stilts, and sandpipers.

This week, I'm linking up with I'd Rather B' Birdin'.

Finally, I'm done with the older posts and working on the newish ones.  I may never be completely current.

On September 28, I chased a bird closer to home.  Just because it was spotted in the Houston area doesn't mean I didn't drive an hour and a half each way, though.

Bear Creek Park is on the northwest side of the city.  My information was that a rare bird was spotted near restroom number 9.  I wasn't familiar with the park and the first restrooms I saw had no numbers.  How do you know if it's number nine?

I found quite a large group of Black Vultures at the pond near the War Memorial. 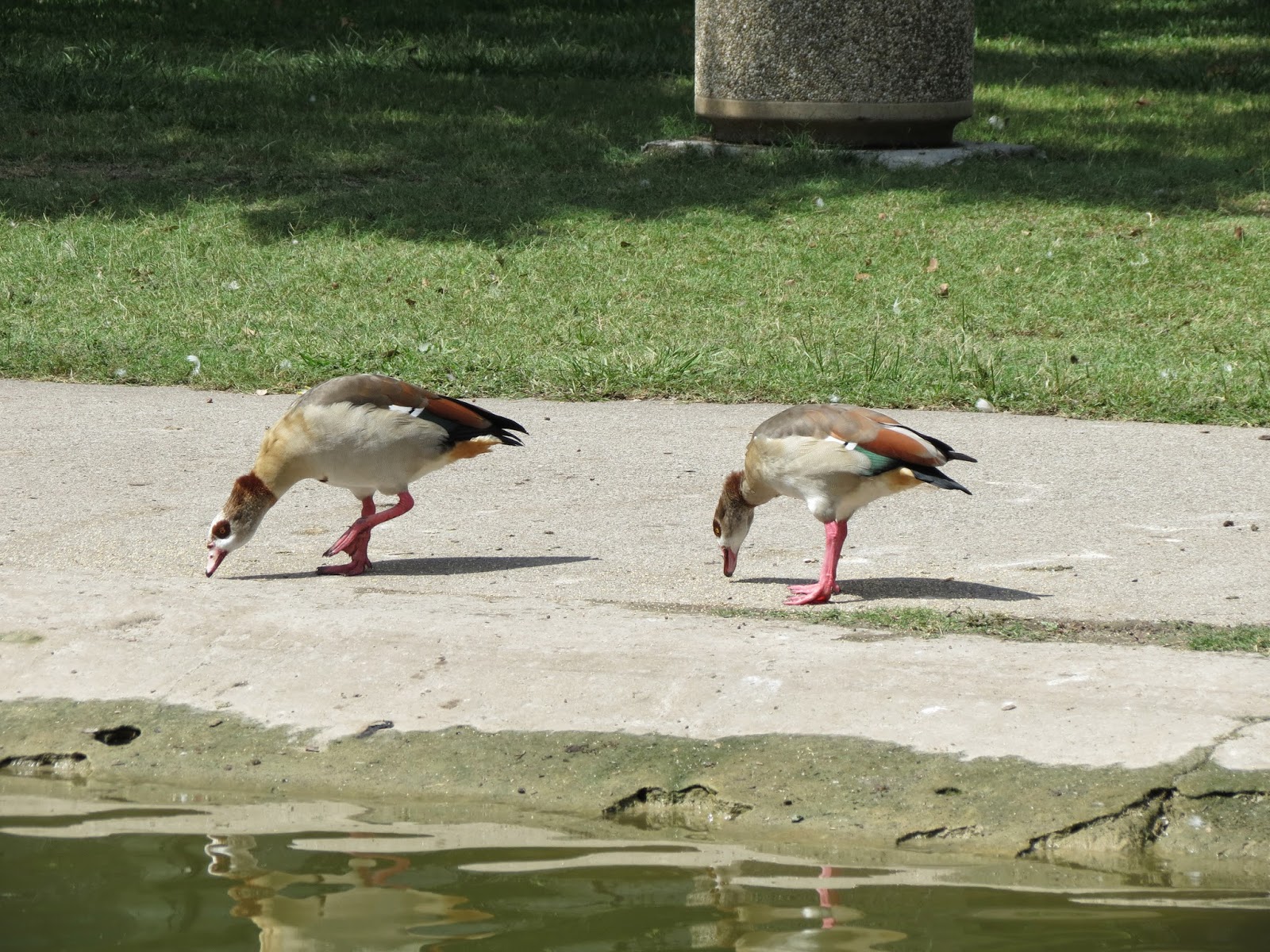 I found these beside the same pond.  My first thought was did a whistling duck hook up with an ugly domestic muscovy?  They need to stop that...  I was able to identify it as an Egyptian Goose by looking through my field guides.  These are imported as ornamentals and some of them escape.

They brought it here on purpose?  Why?  Our native species are much more attractive. 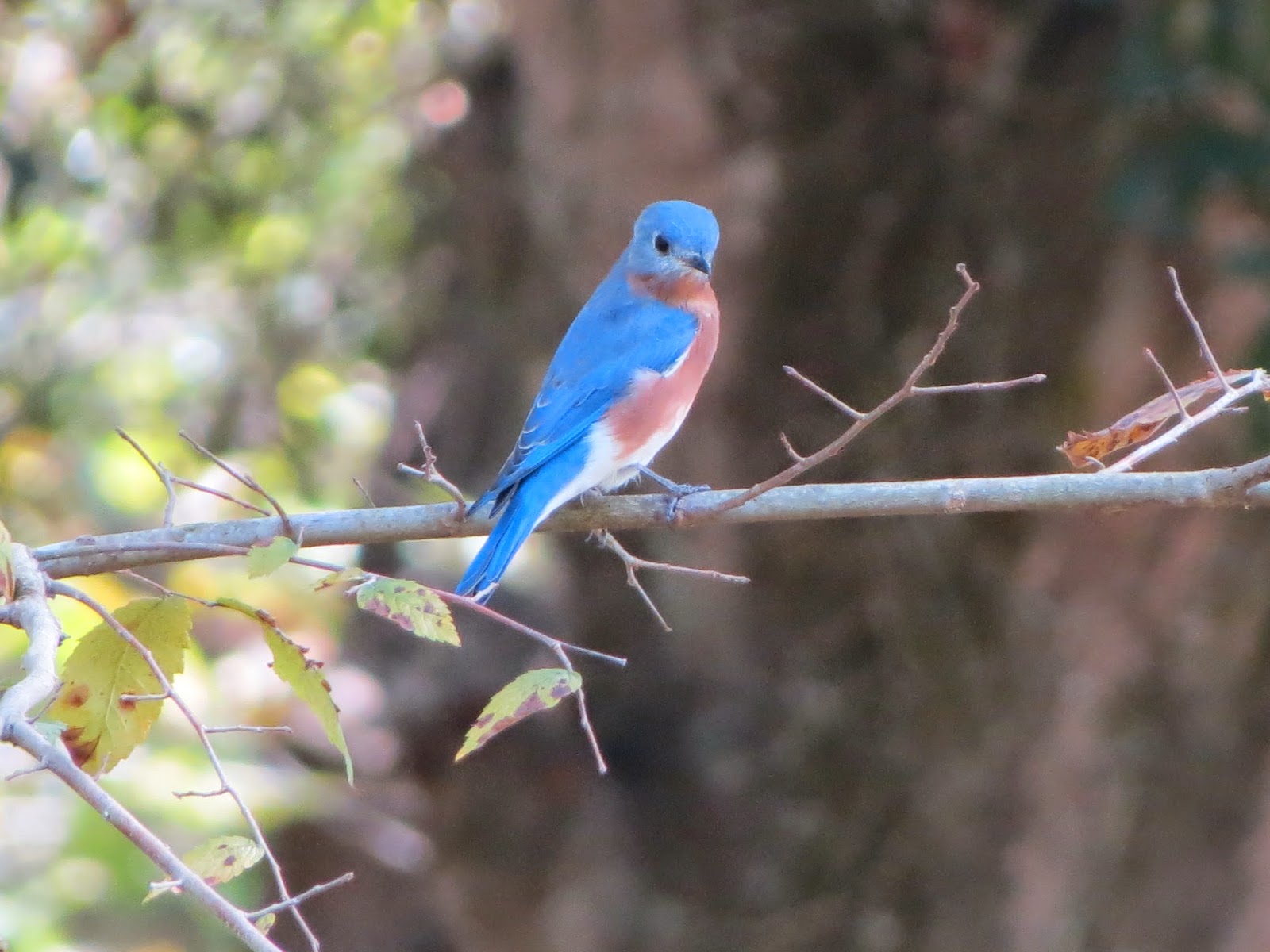 I worked my way around the park, past the zoo area, past the ballfields, around to the picnic pavilions.  Here is where I found Eastern Bluebirds, Pine Warblers, House Finches, and Titmice.  I thought maybe I found my special bird, but I wasn't positive. 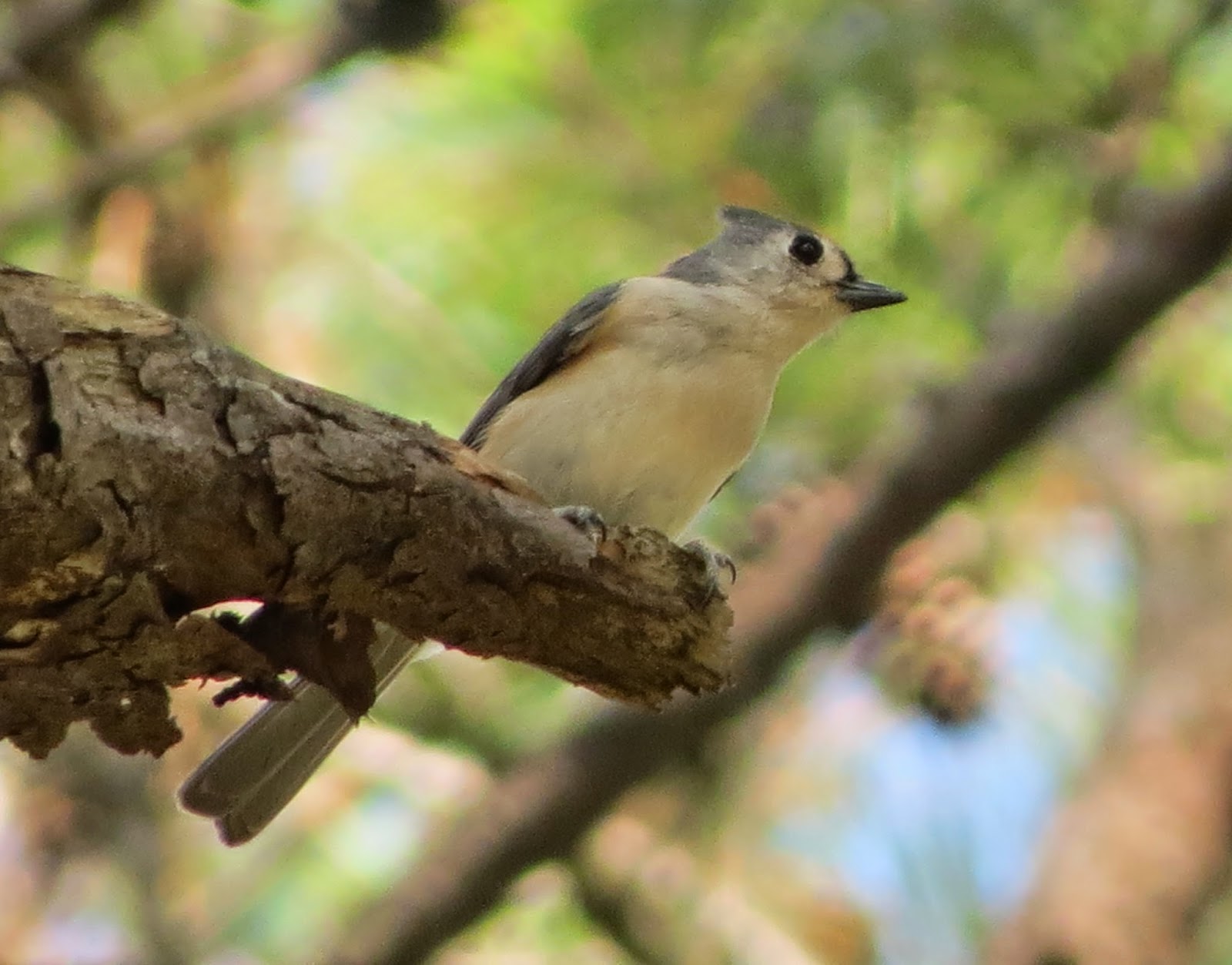 I continued further into the park and finally found the wooded area with the numbered restrooms.  The special bird wasn't here, but I found plenty more bluebirds, chickadees, and titmice.  I got my first ever good photograph of a Tufted Titmouse.

I went home, uploaded my photos, and confirmed... 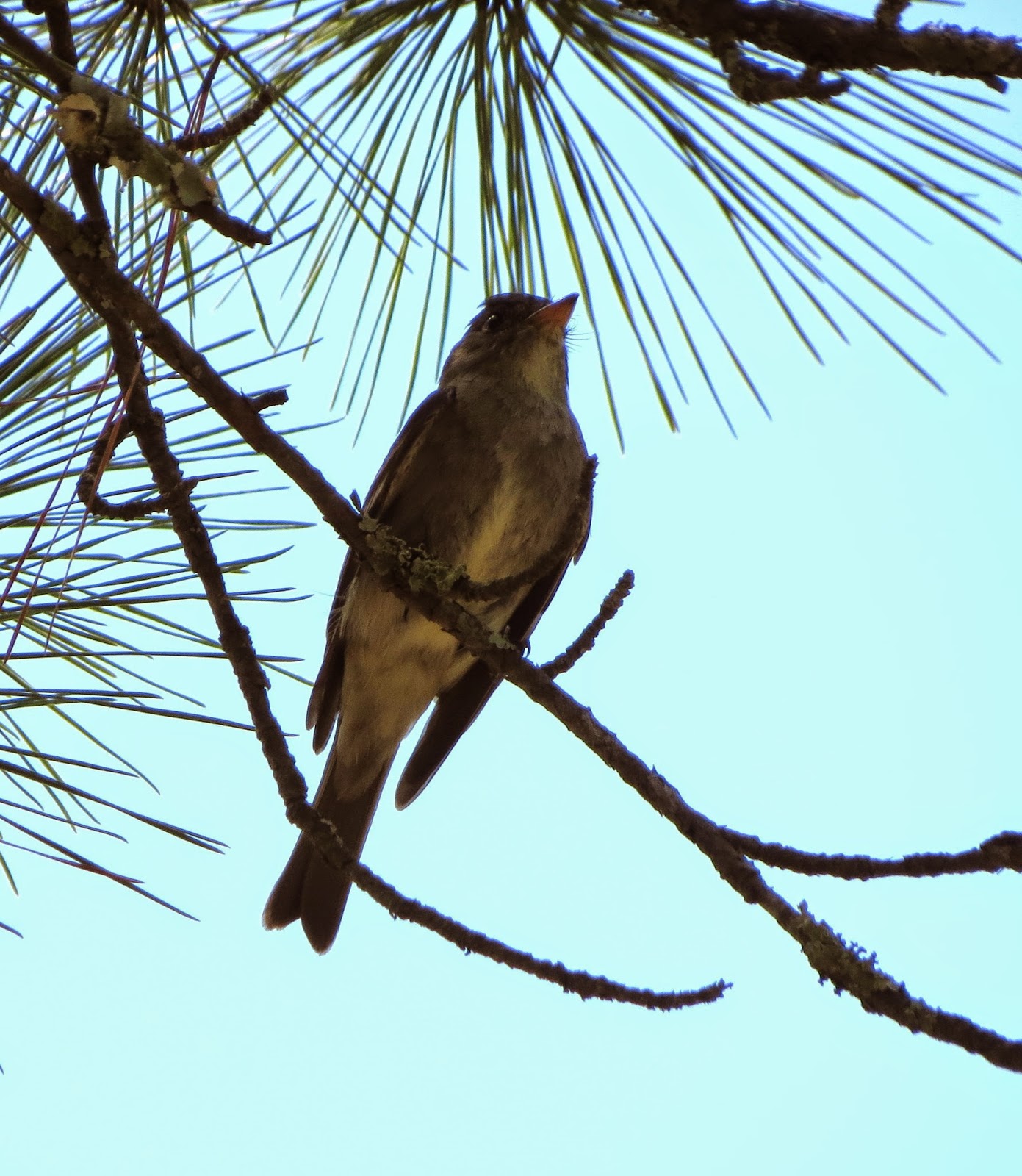 ...it was him by the pavilions!  He's got the longer tail, slender crest, pale lower mandible, and blended underparts that identify him as the Greater Pewee.  What's more interesting than the fact that he is supposed to be found in the western U.S. and Mexico is that he's not lost.  This is believed to be his third winter here in Bear Creek Park.

I wonder where he spends his summers?  If someone were to tag him, would he avoid returning next year?

The Mad Island Wildlife Management Area and the Clive Runnels Family Mad Island Marsh Preserve are both closed to the public, but access may be arranged on special occasions.  When a White-cheeked Pintail was spotted on the WMA, someone was kind enough to organize such a visit.

May 3, 2014, a group of birders, myself included, relocated the bird.  If you were to enlarge the picture below, you'd see the duck off by himself to the right of the larger group has a sharply delineated white cheek.

The White-cheeked Pintail is a vagrant from the Caribbean.  There was some controversy over whether this one should be counted as a wild bird or if he is an escapee.  I'm not sure what was officially decided, but I'm counting him on my life list. 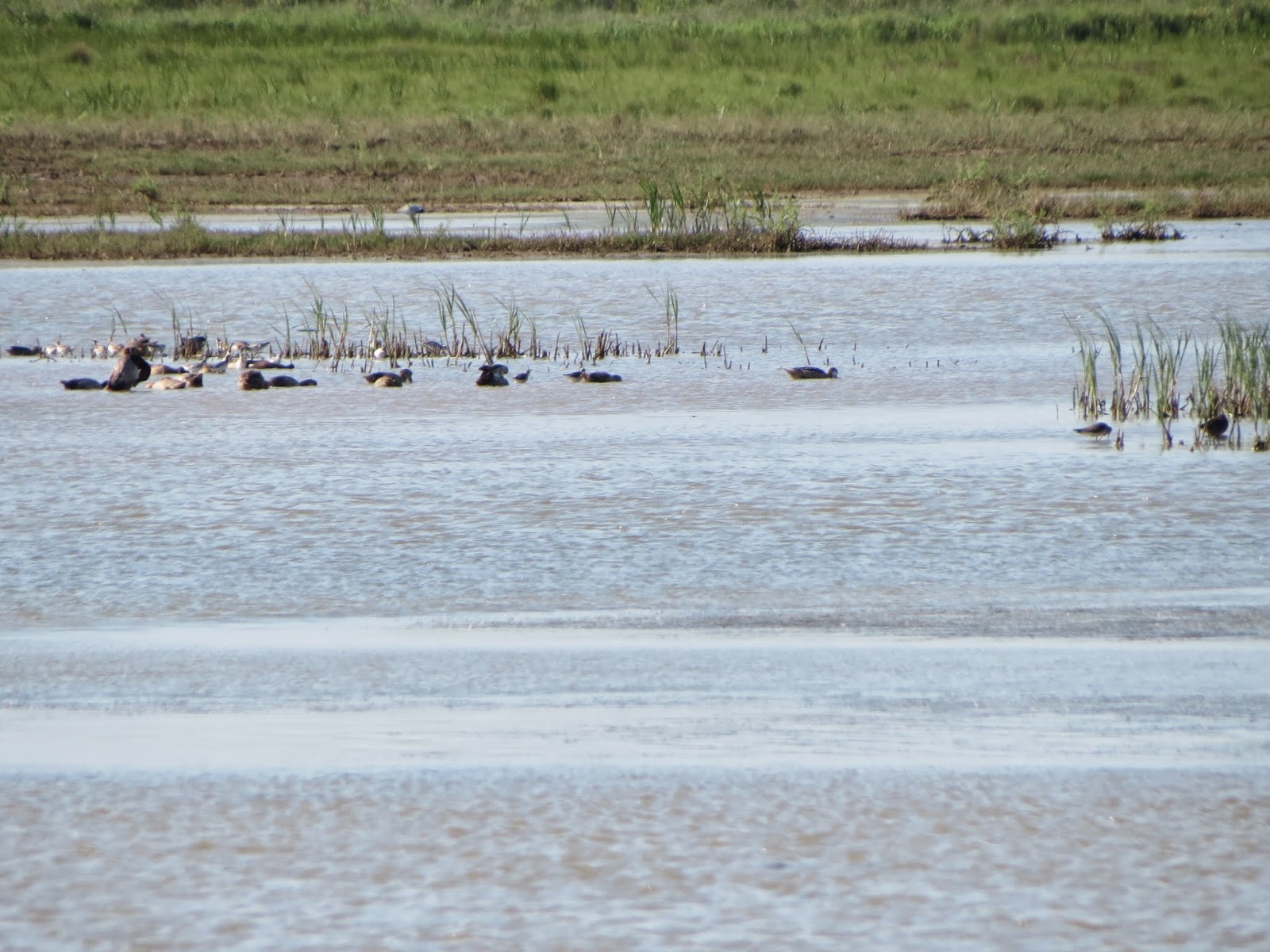 One benefit of a large group of birders is more eyes to spot and identify the birds.  A drawback is that we can't get very close.  I got a good look at the White-cheeked Pintail through someone's scope.

Several people generously shared their equipment and expertise on this day.  After I reacted with great excitement at seeing my first Glossy Ibis, they came and got me when they found another.  I have found birders to be incredibly friendly people. 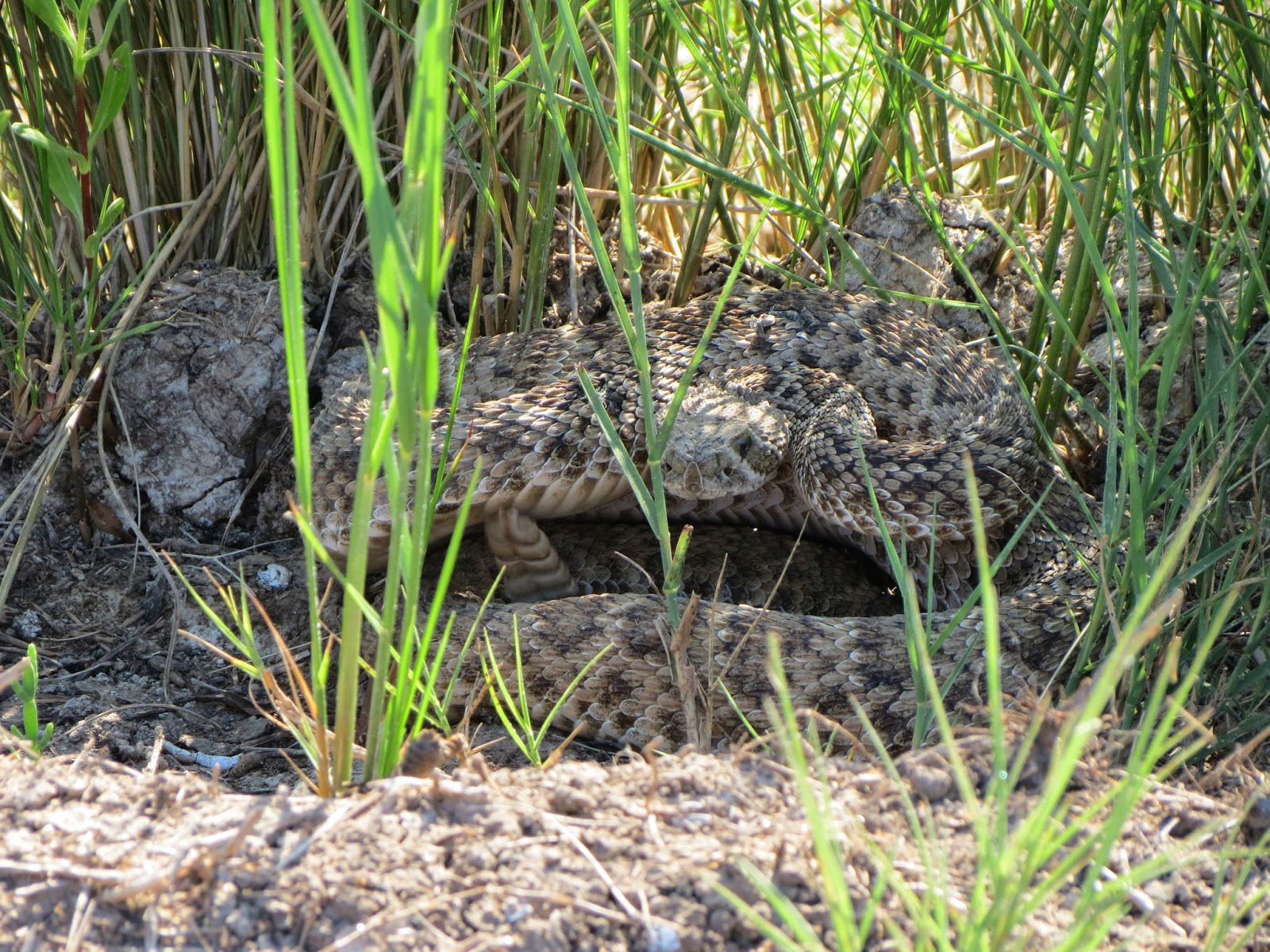 When I first arrived, I noticed several people in knee-high rubber boots.  I asked if we were going to actually need to wade in the water and was a little confused when they gave negative responses.  It wasn't too long before I realized the purpose of the boots.

The Western Massasauga Rattlesnake was vigorously making his presence known.  "Be careful," someone warned.  "A snake that size can strike 20 feet."

Snakes can generally strike half of their body distance, and this was certainly not a 40-foot snake, but I allowed him plenty of space anyway.  That's what zoom lenses are for. 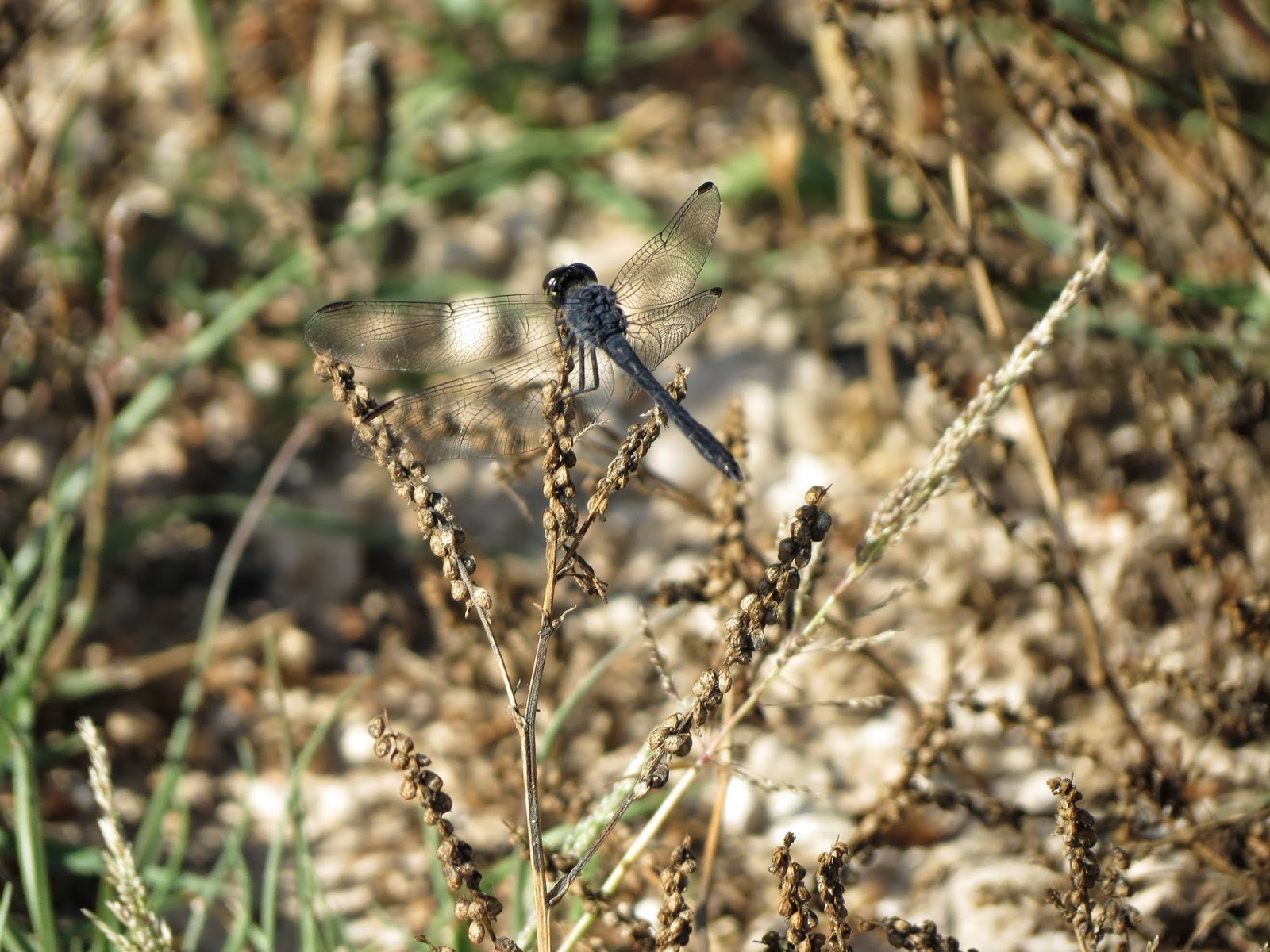 I found the Swift Long-winged Skimmer not far from the rattler.  I hear tell of people that go "bugging" as well as birding.  I already have enough expensive habits.  I will photograph them when  I cross paths with them, though. 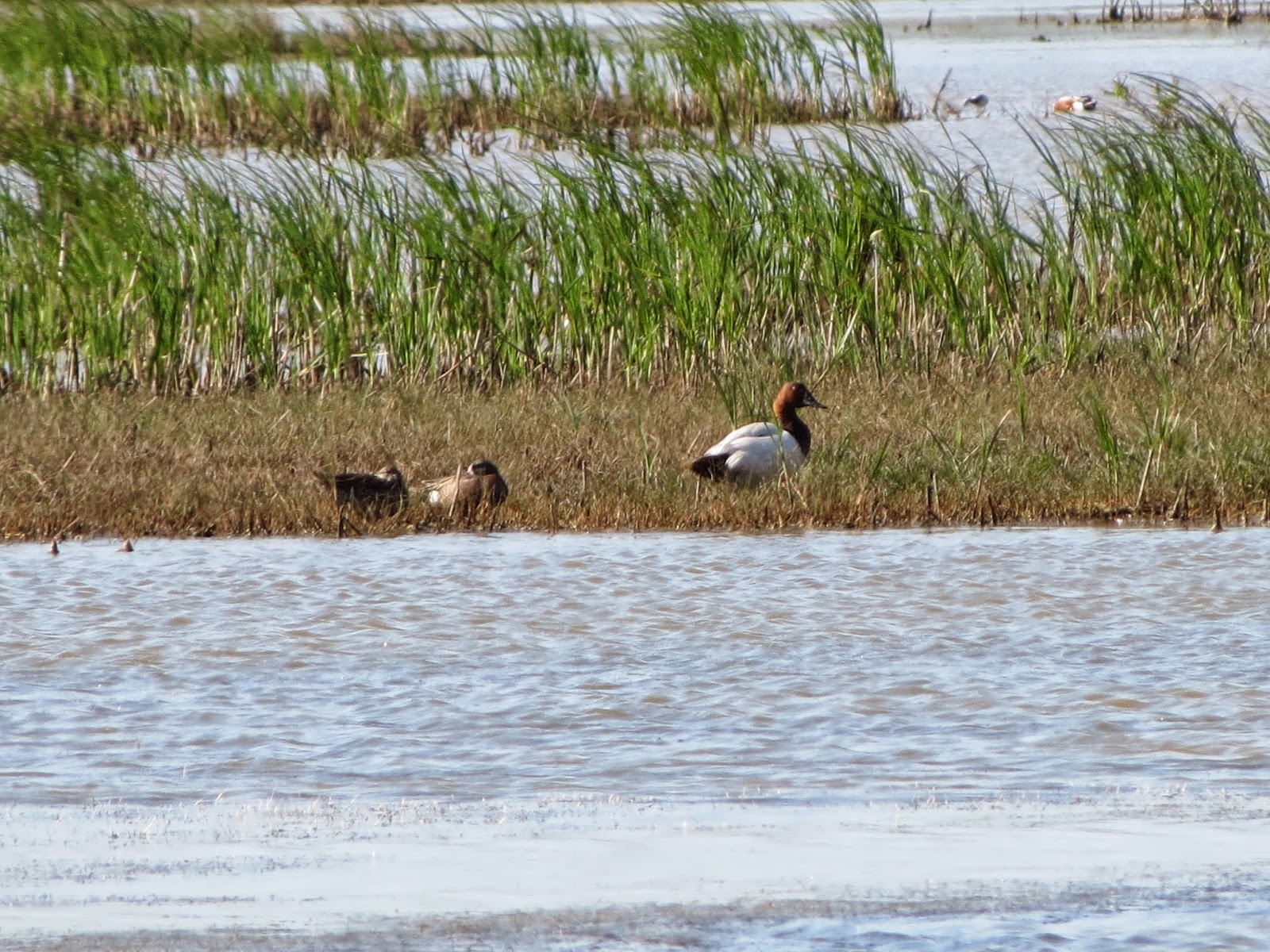 At least 53 species were identified by our group.  Most were too far away for close-ups.  Above is a Canvasback, a lifer for me.  He's the one in the grass not sleeping. 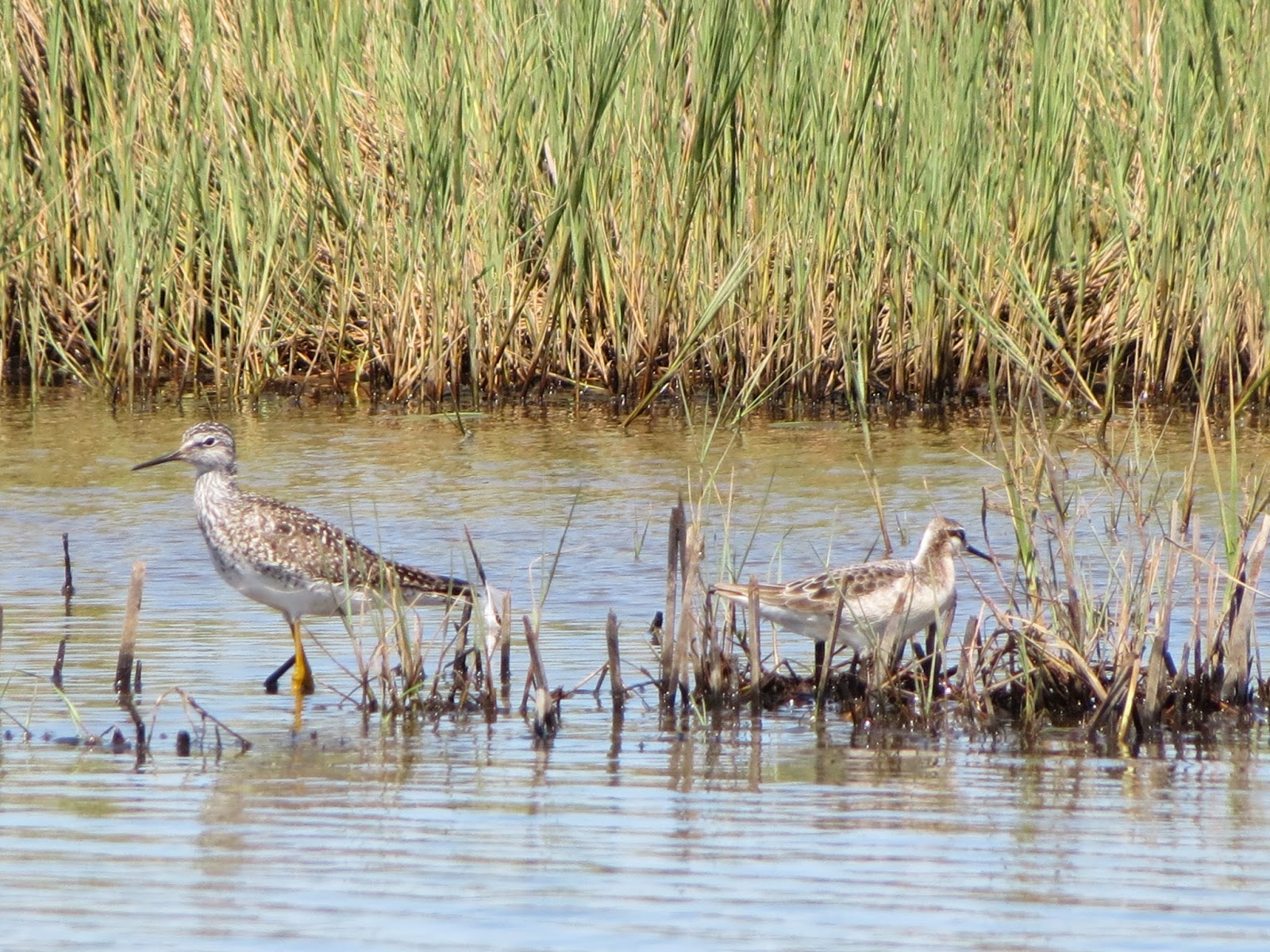 The Wilson's Phalarope, seen here to the right of a Lesser Yellowlegs, was another.

I'm linking up this week with Saturday's Critters.